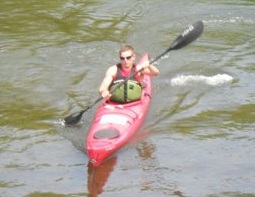 TeamSOG, the 2011 United States Adventure Racing National Champions, is proud to welcome Dan Snyder to the roster for the 2012 season.

Dan Snyder, who originates from Bradford, Pennsylvania, tried-out for a place on the team at the East Coast Adventure Racing Series (ECARS) Championship race in September of this year. During the 18-hour championship race, Dan raced as a solo, but kept up with the nationally-ranked team throughout the entire race. Dan proved himself not only as a physical powerhouse, but also as a great teammate through the encouragement and attitude he brought to the race. Snyder would’ve won the 1st place in his category (i.e., solo male) by several hours; however, Dan asked to not be considered for official placement due to his opportunity to race closely behind the nationally-ranked TeamSOG. Dan contended that he considered this race to be an audition for the team, and therefore he did not think it would be fair to be officially placed on the scoreboard.

Snyder, 27, currently resides in Erie, PA, where he works for a custom injection molding company for the medical device industry as a technical sales engineer. Dan was not introduced to racing until a few years ago. While interning at an engineering firm, Dan signed up to run a 5k with a few coworkers. After that, he was hooked. Dan began doing longer races, eventually moving into triathlons and Adventure Races. Only four years after his first 5k, Snyder completed in an Ironman in St. George, Utah.

Snyder is excited to join the line-up, which also includes AR all-stars Toby Angove, Kristin Eddy, Brian Mayer, Julia Pollock, Kristen Dieffenbach, and Chris Caul. TeamSOG had a great 2011 season, and with all of the up-and-coming talent, promises to be a team to watch in 2012. This year, TeamSOG took 1stplace in the USARA National Championship as well as the East Coast Adventure Racing Championship. They also took 2nd place in the Checkpoint Tracker National Championship. To find out more information about TeamSOG and the East Coast Adventure racing series, visit these sites: www.eastcoastadventureracing.com.