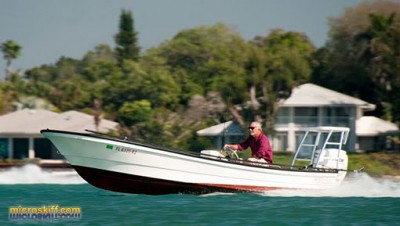 Pangasiidae or “Panga fish” is a family of catfish found in many of the world’s fresh and brackish waters from Asia and Latin America to Pakistan and Borneo. “Panga” when referring to a skiff can be found in just as many locations. Panga skiffs have a deep history spanning from the smallest fishing villages to multi-national corporations and banking interests. So it makes sense that a boat which was developed by Yamaha Outboard for the global commercial market from a design which originated in the fishing villages of Central and South America as a project of the World Bank in the 1960’s and 70’s would derive it’s name from the fish it was built to catch.

The Panga design is about efficiency. Significant numbers of Panga skiffs worldwide are powered by 40hp-75hp two-stroke tiller steer outboards, many by Yamaha no less. These small outboards are tasked with keeping up with the multiple needs of their operators. To match their workload and small output motors Pangas–once called Yamaha Panga–needed to be efficient and versatile. The original Yamaha design started around the large bow intended as a platform from which to cast nets into the water. The large flare also meant that in challenging conditions the boat remains dry, comfortable and safe. The running surface of the Yamaha design included a semi-v bow that transitioned into a running pad. The bow was not the typical sharp entry most boats have but a 2-inch wide strip that transitioned to a 14-inch pad in the stern. This running pad contributed to their efficient operation while using low horsepower outboards. The hull design was meant to skip along the surface of the water. Lastly, the beam seams disproportionately narrow versus the length. However this length to width ration optimizes the efficiency of the hull.

Today “Panga” is synonymous with the rugged utilitarian workboats of a developing nation. The majority of these skiffs spend their time eking out a subsistence living for their villages. Be it through fishing, transporting goods to and from waterside market places or as a taxi or game fishing platform for the globe trotting tourists, the Panga skiff can be seen world wide hard at work. Though some gain a darker notoriety as the maritime platform for warfare or for pirates. Be that is it may, there is no disputing the fact that the Panga has made an impact on the global fishing and boating community. So much so, that some companies have brought their version of these skiffs into the US market.

Enter Mr. Rob McDaniel of PangaMarine. Three decades ago Mr. McDaniel would take sojourns to the Yucatan peninsula for fishing excursions. While in the Yucatan he began to realize the importance of the Panga style skiff and its versatility. After seeing the skiffs abilities he decided to do what any enterprising individual would do: market them in the US.

His first boats were built at a facility in Guadalajara, shipped to the US, then rigged and sold to his customer. However, due to the long distance and relatively non-technological build technique, he decided in 2005 to ship the molds to Sarasota Florida where he set-up his facility. Today PangaMarine offers six base boats from 18’-28’. Microskiff.com was invited to checkout their smallest, currently sold skiff the 18’.

Next PangaMarine changed the box designed stiffing ring under the gunwale to an intergraded I-beam placed under the shear line. The original box design was essential, as these boats typically did not have decks to add lateral rigidity.

Finally a series of lifting strakes and reverse chines were added to improve handling and dry ride charities.

With the hull design squared away and the popularity of the skiffs gaining Mr. McDaniel put a significant amount of energy in the construction of molds.  They have all kinds of molds to suit the needs of all kinds of customers. Each skiff can be fitted with or without a liner. Then buyer has multiple choices of decks, steering configurations, storage possibilities, bait and release wells, fuel tanks sizes, the list goes on and on. Suffice to say the options are seemingly limited only to the owners’ creativity.

Is the Panga style skiff the “perfect” flats skiff? To help answer this I requested the input from a couple of PangaMarine owners. Passion for their boats aside, the feedback was quite honest and echoed my findings. “I think these Panga’s are perfectly suited for adventure minded people. These 18′ skiffs are nearly perfect for a couple guys, maybe 3, to do all kinds of extended coastal outings with the seaworthy attributes to deal with nasty inlets or crossings, offshore exploration, island hopping, etc, pretty much anywhere on the planet. I don’t think you can look at these PangaMarine skiffs as alternatives to the conventional flats skiffs either, because they’re in a completely different class.“ this PangaMarine 18’ Skiff owner commented.

The PangaMarine skiff is a utilitarian skiff. Some may find its looks questionable but these characteristics are what make it work so well. The large bow flare help to make the ride in undesirable conditions safe and dry. A relatively narrow beam to length ratio keeps the skiff efficient allowing for smaller horsepower outboards. With a 50 horsepower outboard average owners see between 33 to 36 mph at WOT with a cruising speed of mid to upper 20’s.

Under a light load with a 50hp tiller the skiff draws, near as makes no difference, 8-inches of water. The skiff is stable to walk about on and has good sea running manors. I found the skiff to be remarkably maneuverable for the size both at idle or at speed. We were fortunate on the day of the review to have a nice wind kicking up a wicked slop offshore. While the 18’ skiff will not run “40mph in 4’ chop” it will run very comfortable at a slower 15-20 mph. Most significantly at no point did I feel unsafe; there were no “white knuckle” moment.

Poling the skiff may be one of its largest drawbacks. While the elevated bow offers a great view for the angler, in windy conditions it also serves as a great sail. In calm conditions, though, it poles with a more mature attitude than some well-known 18’ flats boats twice its price. When poling and fishing alone many owners prefer to go “old school” by poling the boat backwards from the bow. The deep forefoot acts as a keel and keeps the skiff tracking straight.

For the camping/outdoorsman/angler the skiff not only gets you to the camping area but can act as the campground as well. Some popular 1-2 man tents will easily fit in the space between the bow and rear deck on tiller models. Or if the owner is a bit more adventure-minded lay the push pole on the bow and lash the other end to the tiller handle or poling platform and throw a tarp over it for protection from the elements.