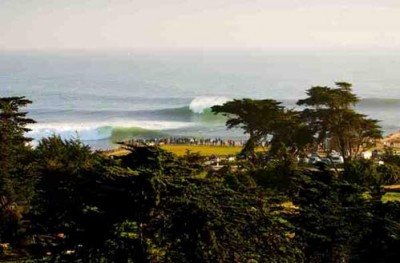 The Santa Cruz zone was approved in February 2011 as an official World Surfing Reserve. The Santa Cruz Reserve, approximately 11 km (7 miles) of coast extending from Natural Bridges on the western end to Opal Cliffs just east of Pleasure Point, is a stretch of cold-water dream waves along a breathtaking coastline that boasts one of the most robust coastal and marine ecosystems on the planet. The region is characterized by a unique surf culture with a deep-rooted history of surfing including credit as the birthplace of surfing in North America. The zone is best known for the iconic spots at Steamer Lane and Pleasure Point, both world-renowned righthand pointbreaks.

“Throughout the world Santa Cruz is synonymous with cold-water surfing and known for its progressive environmental ethos,” said Dean LaTourrette, Executive Director of Save The Waves Coalition and World Surfing Reserves Executive Committee Member. “Its dedication as a World Surfing Reserve will help focus environmental protection of the surf zone locally as well as serve as a global model for stewardship of coastal regions.”

“Santa Cruz is the documented birthplace of surfing on the North American continent and surfing and surf culture are key elements of our communities’ public image,” said Jim Littlefield. ”I’m pleased to represent the reserve through the Local Stewardship Council – this is a true global honor for Santa Cruz.”

“What better spot than Santa Cruz for a World Surfing Reserve?” remarked Skindog. “This place has it all, and I’m stoked to see it get the recognition it deserves.”

For Santa Cruz’s enshrinement, an evening celebration event will be held on April 27th and the formal ceremony will take place on April 28th. Further details of the Santa Cruz World Surfing Reserve Dedication Ceremony will be announced in the coming months.

Also stayed tuned for news on the approved Many Beach World Surfing Reserve in Australia, which will be officially dedicated in the first half of the year in 2012.