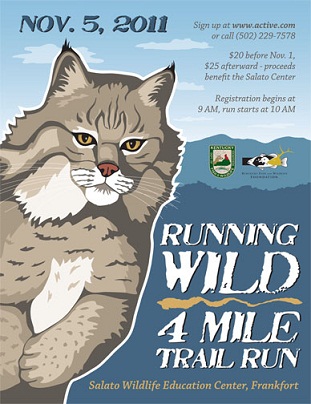 Frankfort, Ky. – Sprint through the woods for charity on Saturday, Nov. 5, for the third annual Running Wild 4-Mile Trail Run at the Salato Wildlife Education Center in Frankfort.

Top men’s, women’s, and overall times will receive prizes. All Running Wild participants will receive a long-sleeved race jersey. The run is sponsored by the Kentucky Fish and Wildlife Foundation; proceeds benefit educational programs at the Salato Center.

Runners shouldn’t leave the kids at home. Children can participate in fun activities led by Salato staff and volunteers during the race.

Participants may register online at www.active.com. Runners may also print a registration form at fw.ky.gov and bring it to the Salato Center to pay by cash or check. The starting line is located at the Wildlife Annex building near the entrance to the Kentucky Department of Fish and Wildlife Resources.

The Salato Center has a variety of native animals for the public to see, including a black bear, bobcats, elk, deer, bison, eagles, snakes and fish. The Center has numerous indoor exhibits and miles of hiking trails open to the public. Fishing is available at two lakes. While some programs may require a registration fee, general admission to the Salato Center is free.

Learn more about upcoming events at the Salato Center on the Internet at fw.ky.gov. The Salato Center, operated by the Kentucky Department of Fish and Wildlife Resources, is located at the department’s headquarters on U.S. 60 in Frankfort, 1.5 miles west of U.S. 127. Hours of operation are 9 a.m. to 5 p.m. Tuesdays through Fridays and 10 a.m. to 5 p.m. Saturdays. The Center is closed Sundays, Mondays and state holidays.