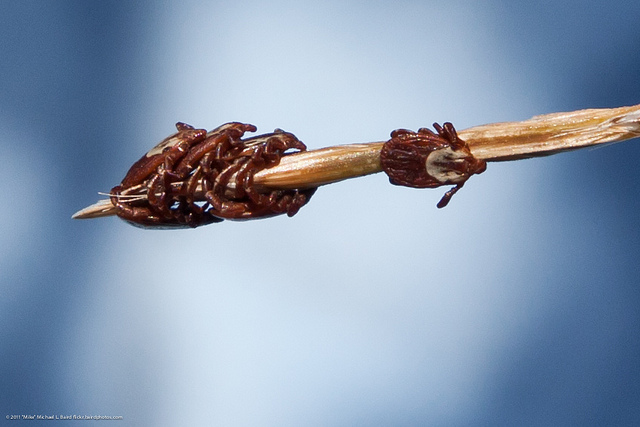 Columbus, OH – Two tick species of public health importance are becoming more common and expanding their range in Ohio – the blacklegged tick and the lone star tick, according to the Ohio Department of Health, Zoonotic Disease Program.

Lone star ticks are common in southern Ohio where they can be found in shady areas along roads, meadows, and woods, and are active from May to the end of summer. These ticks can transmit a bacterial disease called ehrlichiosis.

Blacklegged ticks were once considered rare in Ohio, but now account for about 5 percent of annual tick submissions, primarily from eastern Ohio counties. These ticks are known transmitters of Lyme disease and other, less common human diseases.

Last year, researchers from The Ohio State University (OSU) confirmed an established population of blacklegged ticks in Coshocton County. Ashtabula County was just added to the list and other counties are likely to be included, according to OSU extension entomologist Dr. Glen Needham. Ticks and white-footed mice collected from Coshocton County were positive for the Lyme disease bacterium based on tests done by scientists at OSU College of Veterinary Medicine.

According to the U.S. Centers for Disease Control (CDC), reported cases of Lyme have been steadily rising across the country since national surveillance began in 1982. In 2010, there were more than 30,000 reported cases in the U.S. and more than 8,500 probable cases. An average of 53 Lyme disease cases are reported in Ohio each year, with about half of these acquired during travel outside the state.

Adult blacklegged ticks are actively looking for hosts, such as people, pets or deer, not only in the fall, but on warm winter days as well. This is very different behavior from the lone star ticks or the more common American dog ticks, which are not active from September through March.

Unlike pets and humans, wild animals such as deer are not affected by the blacklegged tick and suffer no ill effects from Lyme disease. Additionally, Lyme disease cannot be transmitted by the consumption of venison. Hunters should keep in mind, however, that hunting and dressing deer may bring them into close contact with infected ticks.

Everyone, especially hunters, should be aware of this new threat and take precautions to prevent tick attachment. Outer clothing should be sprayed with a permethrin-based repellent according to label directions the day before hunting and allowed to air dry. Pants should be tucked into socks or boots and shirts into pants to keep ticks on the outside of clothing. These ticks will be difficult to spot on camouflage clothing. All clothing should be carefully inspected for small, dark crawling ticks before entering vehicles and going indoors. Once inside, thoroughly check for small, attached ticks.

Remove attached ticks as soon as they are discovered to reduce the risk of contracting tick-borne diseases. To safely remove ticks from yourself, hunting dogs, or deer, use tweezers or your fingers protected by paper towel or tissue. Grasp the tick as close to the skin as possible and pull straight out with steady, even pressure. Do not use petroleum jelly, fingernail polish, alcohol, cigarettes or matches to try to kill or stimulate the tick to move out because those methods do not work and may be dangerous.

The Ohio Department of Health’s web site has helpful information and images about tick identification and tick-borne diseases. To learn more visit www.odh.ohio.gov and search the A-Z index using the word “tick.” The CDC web site has further details on Lyme disease nationally at www.cdc.gov/lyme.

If you believe the tick you found is a lone star or blacklegged tick, or if you are unable to indentify the tick, you may take the tick to your local health department or mail the tick to Ohio Tick Survey, Zoonotic Disease Program, 8995 East Main Street, Building 22, Reynoldsburg, Ohio 43068.

To have the tick identified, it should be saved in a hard container such as a pill bottle or film canister. Place a few blades of grass in the container with the tick. Containers should be mailed as soon as possible. If needed, the ticks may be safely refrigerated for several days until mailed. Be sure to include the following contact information: name, address and phone number; date tick was collected; Ohio county where it was collected, and indicate whether or not the tick was attached to a person or animal.

The first sign of Lyme disease is usually an expanding large circular rash that appears from three to 30 days after attachment and lasts for days or weeks. This rash may be followed by fatigue, chills, fever, headache, muscle and joint aches, and swollen lymph nodes. Seek medical attention immediately if any combination of symptoms occurs, and mention the possibility of Lyme disease. Antibiotics are very effective when the disease is detected early.

The ODNR ensures a balance between wise use and protection of our natural resources for the benefit of all. Visit the ODNR Web site at www.ohiodnr.com.