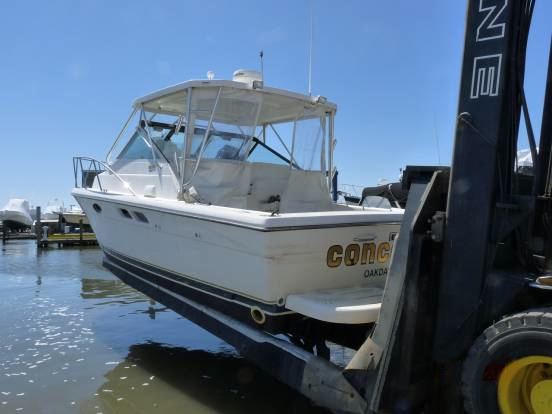 ALEXANDRIA, Va., October 6, 2011 – As a hurricane approaches, having a boat hauled to dry land offers the most protection from damage. But hauling can come with a cost, making the decision potentially expensive. That’s why having “Hurricane Haul-out” coverage in your boat’s insurance policy, which helps defray the cost to remove a boat from the water, is so important. With last month’s Hurricane Irene, BoatUS reports that the total value of the boats removed from harm’s way under its marine insurance hurricane haul-out provision totaled over $216 million.

All BoatUS boat policies include “Named Storm Haul-out Reimbursement.” When a boat is in the path of a NOAA-named storm (within the five-day “cone”), a boater is eligible for 50% of the cost of labor, up to $1,000, to have the boat professionally hauled, prepared and tied-down by professionals which includes marina or boat club staff, paid captains, dock masters or marine surveyors. With BoatUS, a hurricane haul-out “claim” does not penalize a policyholder.
“Having hurricane haul-out coverage helps boats survive storms by making the decision to get out of harm’s way that much easier,” said BoatUS Marine Insurance Claims Division Vice President Rick Wilson. Preserving millions of dollars in boat value also lessens the chance for rate increases, and damage to boating facilities such as boat clubs and marinas is avoided. “It’s a real win for everyone,” added Wilson. With Irene, BoatUS credits marina staff and club volunteers for making early and thorough preparations. “Without their help, losses would have been much greater,” he added.
Just days before the storm’s arrival, Wilson recalls a frantic phone call he received from a marina owner whose property was in Irene’s crosshairs. “The owner called us because he had heard about our haul-out feature, and wanted to know if it was true,” said Wilson. “I responded to him that yes, his marina was within ‘the five-day cone’ and our haul-out coverage was in effect. I barely had a chance to finish when he said to me, ‘Hang on a minute,’ put down the phone, and in the background I heard him loudly say, ‘OK, let’s haul out all of the BoatUS insureds now!”
For more information on BoatUS boat insurance, or to get a free quote online, go to www.BoatUS.com/insurance or call 800-283-2883. BoatUS offers an array of boat insurance policies, including specialized coverage for watersports, angling enthusiasts and fishing guides.