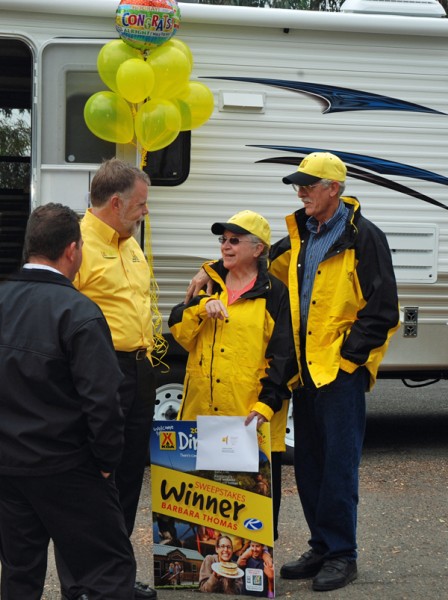 BILLINGS, MT October 3, 2011 –  Barbara and Robert Thomas of Orland, California, found out Monday that they were selected from nearly 100,000 entries as the big winners of the “Kamping In Style Giveaway,” sponsored by Kampgrounds of America and Keystone RV Company.

The Thomases are now the proud owners of a new 28-foot, 2012 Keystone Springdale towable camping trailer. The Orland couple was surprised on their rural Orland farmstead Monday morning by a “prize patrol” led by Kampgrounds of America Inc. CEO Jim Rogers and Kevin Warren, district sales manager for Keystone RV Company in California. Also on hand was Perry Bates, owner of Redwood Empire RVs of Ukiah, California, who delivered the new Keystone RV to the Thomas’s doorstep.

“Oh yes, we are going camping!” said an excited Barbara Thomas. “We’ve always dreamed about making a big loop around the country after Robert retires, and now we can!” Barbara said her husband plans to retire from his “second job” as a maintenance supervisor for California State University – Chico this December.

“I think we’ll be hitting the road this spring,” she said.

“It was so much fun to be able to personally surprise our winner like this,” said Rogers. “They were so excited. The Keystone RV is a wonderful prize, and we’re happy it went to someone who is truly going to appreciate it.”

The “Kamping In Style Giveaway” was prominently featured in one million copies of the 2011-2012 edition of the KOA Directory, as well as on both the KOA.com website and the Keystone RV Company website. Barbara Thomas’s name was randomly selected from all of the entries gathered throughout North America. They also won 10 free nights of KOA camping, as well as VIP status in KOA’s Value Kard Rewards program, which affords them additional savings on all of their future KOA camping.

Barbara Thomas said she and Robert first purchased a “very used” travel trailer to provide temporary housing for one of their two sons, but decided to take it camping this summer at the Westport Beach/North Mendocino Coast KOA in California. Soon after, they received an e-mail inviting them to enter the “Kamping In Style Getaway” contest.

Keystone RV Company is the number-one-selling brand of RV in North America, with brand names including Springdale, Montana, Cougar, Outback, Passport, Sprinter, Laredo, Fuzion, Hornet and Raptor. One out of every four RVs sold today is a Keystone. There are more than 1,000 Keystone dealers in the U.S. and Canada.

Kampgrounds of America, founded on the banks of the Yellowstone River in Billings, Montana in 1962, is now the world’s largest system of open-to-the-public family campgrounds. KOA has 475 locations in the United States and Canada.