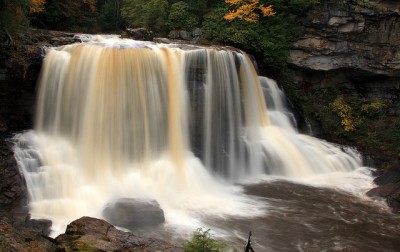 Davis, W.Va. – Thirteen additional vacation cabins will open Oct. 1 at Blackwater Falls State Park. There now will be two distinct cabin areas at the park, with 26 original cabins toward the Balanced Rock and Lindy Point area, and the new cabin area located in the Pendleton Point Overlook area. The total cabin inventory at Blackwater Falls is now 39.

“The units blend the tradition of West Virginia’s state park cabin hominess, warmth and appeal with modern conveniences and comfort,” said Robert Gilligan, park superintendent. “The cabins will become popular with visitors as word spreads they are completed and open.”

Blackwater Falls, near Davis in Tucker County, opened to the public as a state park in 1937 and has been one of the state’s main tourist attractions ever since. The park continues to grow with updated or added facilities and services. The 13 new cabins were built with $4.5 million dollars of Lottery funds earmarked for park system capital improvements.

“These units have all the comforts of home,” according to Paul Redford, a district administrator with West Virginia’s state parks. “The interiors are nicely appointed and have contemporary furnishings. It’s a good investment for the future of tourism in West Virginia. Blackwater Falls is one of those special places that spans generations of visitors. The cabins will add to the park’s popularity.”

“The cabins face into the forest,” Gilligan said. “When guests sit a spell on their cabin front porch, they’ll not see other guests or vehicles.” Parking is behind the units where the road flanks the cabin area. The park website, www.blackwaterfalls.com, includes an updated map locating the cabins, lodge, campground, hiking trails and other park facilities.

“West Virginia’s parks remain open while many states’ parks are closed or reducing operations,” said Brad Leslie, who oversees engineering projects for the parks system, including the new cabins. “We can build it, and people will visit the park, but we also look to the future and upkeep what we have so our park system can continue to serve the general public and residents of the state proudly.”

Blackwater Falls State Park is open year-round and is considered a four-season tourist destination. Known for the annual Spring Wildflower Pilgrimage, visitors know the area for the scenic 62-foot main waterfalls. Skiing at nearby Canaan Valley and the sled run at Blackwater Falls provide wintry options for outdoor recreation, and fall foliage creeps across the landscape a little earlier than other parts of the mountain state due to temperatures, elevation and tree species.

For more information about Blackwater Falls State Park, the cabin project, or to make reservations, visit www.blackwaterfalls.com or call 304-259-5216. Reservations for the new cabins begin at 8 a.m. on Oct. 1, 2011.