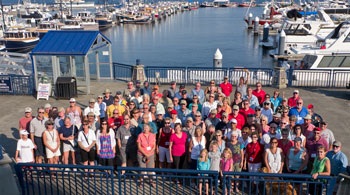 Kent, WA—The third annual Ranger Tugs Owner’s Rendezvous event was held September 9-11 at the Port of Bremerton Marina in Washington.  The annual event is organized by an active group of owners and supported by the factory. There were over 150 people in attendance including Ranger Tug owners and enthusiasts plus Cutwater owners and 68 total boats, more than 20 additional boats than the previous year’s event. The Owner’s Rendezvous is a growing event with guests who traveled from California and Michigan to Maine, New York and even Florida to attend.

Ranger Tugs displayed all of their 2012 models, had live music, a barbeque, cocktail party and enough raffles and door prizes that almost everyone left with a prize. “This event is unlike any other owner group rendezvous and gathering; attendees often comment that it is unlike anything they have ever experienced,” notes Jeff Messmer, Vice President, Sales and Marketing

With each Ranger Tug model displayed, ranging in size from 21 to 29 feet, the rendezvous offered attendees not only an opportunity to compare the different models, but also an opportunity to participate in various social and educational events.

Silent auction organizer Nita Ostlund shares, “We raised a total of $3517 and the money will be split 50/50 going to the charity Sea Scouts and to the 2012 Ranger Tug Rendezvous.”  She shared that over 60 items were collected for auction such as West Marine binoculars and three gift certificates for a two-night stay at the Roche Harbor marina.

New Ranger Tug owners and well-known trawler writers, Jim and Lisa Favors, found the rendezvous to be, “a rip-roaring time. We have to say that we were not disappointed. John and Laurie headed the rendezvous event committee and we have to say, they sure know how to put on a party and keep it on track.”

The event ended with success and the assurance that the rendezvous will be held again in 2012. Information will be available on the owner’s group website, tugnuts.com.