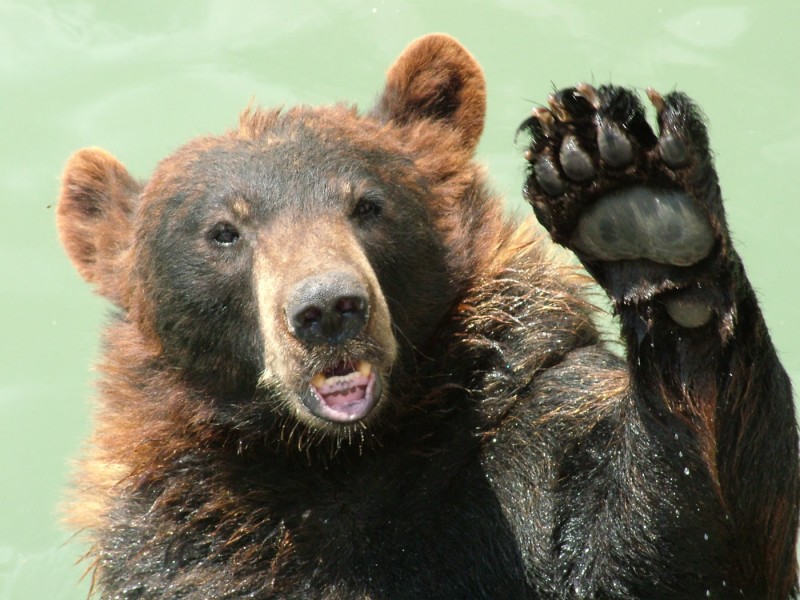 GRAND JUNCTION, Colo. – For Colorado residents, September’s shorter days and cool, crisp mornings signal that it’s time to wrap up summer projects and prepare for winter weather. For black bears, the arrival of fall is more like a warning: “Time to eat as much as possible – if you want to live.”

With bears now entering their binge-eating season, Colorado Parks and Wildlife managers are urging residents and visitors to take special care to secure trash, birdseed and other easy sources of food. Bears that learn to find meals around homes and businesses often become problem bears that end up being destroyed, wildlife managers say.

“It’s just amazing how much one bear needs to eat,” said Watchable Wildlife Coordinator Trina Romero. “And that’s the only thing bears care about right now – eating nearly everything in sight.”

Black bears don’t technically hibernate – it’s more like a long sleep. However, the result is the same – Colorado bears need to pack on enough fat to survive four or five months without a meal, so during late summer and fall, bears enter a condition called “hyperphagia,” which compels them to eat for as much as 20 hours a day.

During hyperphagia, a bear may increase its intake of food from 8,000 calories to 20,000 calories per day. That’s about the number of calories found in 70 McDonald’s cheeseburgers. While Colorado bears have evolved to survive on a diet of berries, acorns and the occasional prey item, they will readily take advantage of an easy meal consisting of trash or poorly stored food. Every year, the combination of hungry bears and careless humans creates conflicts that Colorado’s wildlife managers are charged with sorting out.

The typical consequences of poor food and trash storage are a garbage-strewn lawn or a camping trip cut short. In some cases, it can even lead to a damaged kitchen. However, for bears, the consequences are often fatal. Because a wildlife manager’s priority is human safety, problem bears are tranquilized and relocated only once. The second time they get in trouble, they are destroyed. So are bears that enter homes or show aggression toward people just once.

“It’s unfortunate, but some bears are killed simply because people can’t be bothered to secure their food or trash,” said Area Wildlife Manager JT Romatzke. “Public safety has to be our first priority, but I can tell you that putting a bear down because of someone’s thoughtlessness is one of the worst parts of my job.”

The problem is compounded by a bear’s natural intelligence and excellent memory. Once a bear learns how to get an easy meal, they will apply that knowledge again and again in the following years. Sows can teach their cubs the same behavior, creating a cycle that can bring them into a conflict with people.

Although wildlife managers have the option to relocate a nuisance bear, it is an option that is becoming increasingly difficult as development continues to encroach on bear habitat. In addition, it is not uncommon for relocated bears to return in search of the easy meals that got them into trouble in the first place, or resume their bad habits in their new habitat.

Although bears do not typically attack humans, they are large, powerful animals and their determination to eat makes them dangerous when they learn human items and places are a source of food. This summer saw several high-profile incidents involving bears that entered tents in search of food and injured the occupants.

“These bears were likely rewarded in the past and learned that people and tents mean an easy meal,” said Area Wildlife Manger Perry Will. “We do have concerns about some bears, but overall, we have quite a few more concerns about people who don’t follow the rules.”

Colorado Parks and Wildlife is one of several government agencies that conduct ongoing public education campaigns on living with bears. The agency provides extensive information through their website, pamphlets, media stories and even magazines and books. In addition, they also dispatch volunteer “Bear Aware” teams to go door-to-door in problem areas.

“It’s frustrating because this information is so easy to find,” Northwest Regional Manager Ron Velarde. “There really is no excuse in the majority of cases.”

According to Kevin Wright, the District Wildlife Manager in Aspen, what’s especially disheartening for wildlife managers is how quickly people who live in bear country forget about their responsibility to help prevent problem bears.

“Considering the consequences, you’d think folks would learn the first time a bear gets into their trash, or their home,” he continued. “These should be habits that people practice year round. But for too many people, we have to remind them again and again.”

“A problem bear is everyone’s problem,” said Schwab. “If even one person doesn’t care enough to take precautions and a bear gets into their trash or their house, it increases the chances that the bear will move on to the neighbor’s house, and so on. Multiply that by thousands of bears across the state that are now preparing for winter and you can see why it is so important for everyone to do their part.”

Following the tips listed below is a good start to help reduce conflicts around the home, however, many other tips regarding hiking, camping and hunting in bear country can be found in Colorado Parks and Wildlife’s website at: http://dowtest.state.co.us/WildlifeSpecies/LivingWithWildlife/Mammals/Pages/LivingWithBearsL1.aspx

Get Rid of Attractants