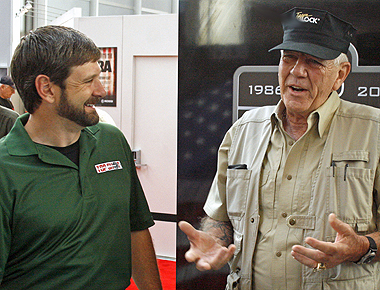 Top Shot had viewers a bit perplexed last night on The History Channel when host Colby Donaldson (Survivor: The Australian Outback fame) let it be known that instead of shooting, the contestants would be throwing. That’s right, it’s not your Daddy’s version of Top Shot … it’s your Great-Great-Granddaddy’s Top Shot. For last night was the night that they brought out the knives, the tomahawks and the rocks. Yes, that’s right, rocks.

The question was whether or not their marksmanship extended into the more basic primitive genre. To get a better understanding of how to use these tools, we contacted Reloaded Top Shot Chris Reed while he prepped for Field & Stream’s Total Outdoorsman competition in Missouri.

“In a nutshell, it’s a combination of accuracy, knowledge, technique and practice,” Reed explained. “Some things, like throwing a rock, is practice and muscle memory. Guns you need knowledge of a lot of things like trajectory, trigger squeeze and sight picture to be effective. Each have their place in someone’s arsenal and can be used like tools in a toolbox.”

First tool was a Tomahawk. Thrown at a revolving and then a protected target, teams split the difference and moved on to knives.

Billy from Team Blue (TB) hit with his first knife while Gary from Team Red (TR) hit nada. Then the Mikes were up. Facing a board filled with 52 playing cards, TR Mike had no trouble finding the board … he just couldn’t find a card. That left the door open for TB Mike to win with a single throw. Then they broke out the rocks.

In a calling back to the days of a misspent youth, TB Billy and TR Bill were charged with breaking windows. Hit three in a row (out of nine) and you’re home free. TR Bill quick found his mark but had trouble completing the task. TB Billy had great success knocking out panes, just not a lot in a row and the winning flag ultimately landed in Red’s corner. Team Red solidified the win when Cliff knocked five cans off a post before Dustin could hit number 2. That sent Team Blue off to the elimination round.

In another genius elimination round stroke (last week’s introduction of the Gatling Gun being another,) Top Shot ‘forced’ the nominees (Mike and Jarrett) to shoot a Hotchkiss Mountain Gun at water towers standing from 180 to 220 yards away. When Colby dropped the flag, the competitors ran to their Hotchkiss, wheeled it in place, loaded up and fired.

We might not have a Hotchkiss Mountain Gun in the Museum, but we were able to locate a Austrian Mountain Howitzer

“That ought to wake up the neighbors,” Donaldson proclaimed.

“It startled us all because MAN that thing was loud,” chucked an onlooking Dustin Ellermann.

Both men hit their first water tanks with relative ease, but it was Mike who found his mojo. After nailing his second tank, Mike easily completed cleaning, loading and firing the Hotchkiss to claim the win.

In an episode that had viewers tweeting complaints about the inclusion of rocks (@ZombieDefenseHQ: We will be offering a class on Tactical Rock Throwing $200/hr Please bring your own ammo OR @Angelfishgirl What about flinging newspapers from a bike!) it sure as heck ended with a bang.

As for next week, we’ve been promised with the return of past Top Shot Winners Iain Harrison and Chris Reed to captain the opposing teams and take on the fabled round-the-corner shot. It’s not exactly throwing rocks, but it promises to be something to see.