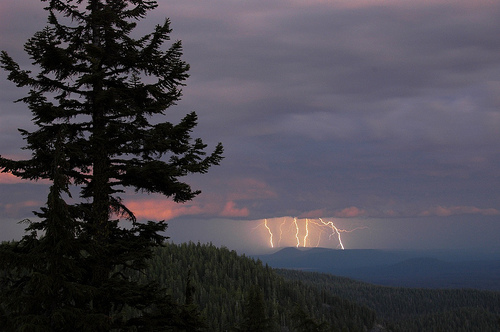 Three fires in the Red Cone area of Crater Lake National Park are being managed jointly as the Red Cone Wildland Fire Complex. Seventeen fires were ignited by lightning within Crater Lake National Park between August 20 and August 28, 2011.  Suppression actions were taken on fourteen of the fires.  The Red Cone, Red Cone #2, and Trail fires are being managed for long term benefits including forest health, biodiversity, and hazardous fuel reduction. Together, the three fires total approximately thirty acres.

Fire managers expect these fires to burn throughout the remainder of the season, allowing natural conditions and weather to eventually extinguish them. Fire personnel will continue to closely track the progress of the fires to prevent any threats to public safety or facilities.  Strategies have been developed to take suppression actions if conditions warrant.

All park roads and facilities remain open. Because the fires are located adjacent to park trails, a temporary closure has been established in the fire area.  The closure affects the Pacific Crest Trail between the Lightning Springs Trail and the North Entrance Road, and the Bald Crater Loop Trail.  Pacific Crest Trail hikers are advised to use the Rim Trail as an alternate route through the park.  This route offers excellent views of Crater Lake.  Stock users should be prepared to trailer stock around the closure.  Stock use is not permitted on park roads or the Dutton Creek Trail.

Smoke from the Red Cone Fire Complex is visible from several locations along the West Rim Drive. More information on the fires can be found on the National Park Service Fire & Aviation Management web page at http://www.nps.gov/fire.