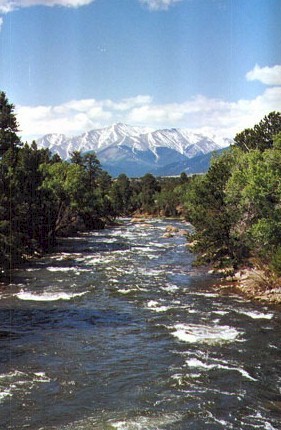 SALIDA, Colo. – Outside magazine selected the Arkansas Headwaters Recreation Area (AHRA) as one of the top five state parks in the nation. The AHRA is a 152-mile Colorado State Park that features one of the nation’s best whitewater boating locations as well as one of the state’s premier brown trout fisheries.

The popular outdoor magazine said that the AHRA is renowned as one of the nation’s most popular locations for rafting and kayaking on the Arkansas River – calling it “the most commercially rafted stretch of river in the country.”

Outside magazine notes that state parks never get their due because of the attention focused on the country’s great national parks, including Yosemite, Great Smokey and Rocky Mountain National Park. However, there are more than 7,800 state parks around the nation that include 44,000 miles of trails and 220,000 campsites. The magazine also pointed out that 740 million people visited state parks and preserves in 2010, compared to 276 million for national parks.

“We are thrilled that Outside magazine selected the AHRA as one of the top five state parks in the nation,” said Rob White, the AHRA’s park manager. “Everyone associated with the AHRA, the employees, the outfitting community and our dedicated volunteers work hard to ensure that the AHRA provides the highest quality experience for all of our visitors, including anglers and whitewater boaters.”

In early spring, late summer, and deep into the fall months anglers relish the many eddies, ripples and deep pools the Arkansas offers. While on a typical spring or summer day, hundreds of private and commercial rafts and kayaks will challenge the churning rapids or glide through the calmer sections of the Arkansas. AHRA visitors also enjoy camping, picnicking, wildlife watching, mountain biking, horseback riding, rock climbing, and even gold panning along the river’s shores, deep canyons, broad valleys and towering mountain peaks found within the upper Arkansas River valley.

The AHRA is managed through a cooperative effort between Colorado State Parks and the Bureau of Land Management. Formed in 1989, this partnership allows agencies to provide visitors with recreation opportunities and care for significant natural resources of the Upper Arkansas River Valley.