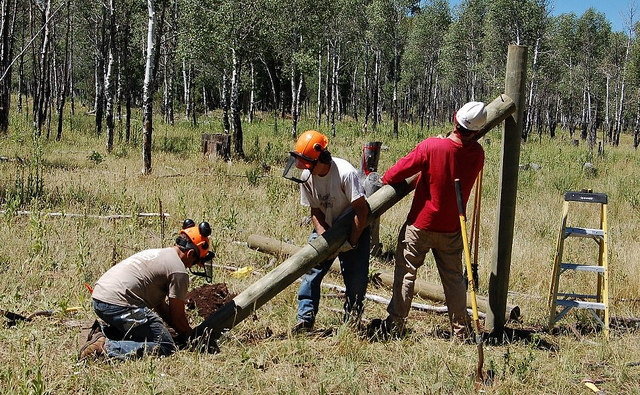 WILLIAMS, Ariz. – Aspen trees are known for their beauty and the soft rustling of their leaves in a summer breeze. Unfortunately, they are also becoming known for their rapid decline in northern Arizona, including on the Kaibab National Forest. That’s why the forest’s tree specialists are working to protect and restore aspen on the Williams Ranger District.

Through a grant received from the National Forest Foundation with funding from the Salt River Project Trees for Change program, the Kaibab National Forest is constructing protective fencing and doing treatments around a number of severely imperiled aspen clones on the Williams Ranger District. Such efforts have proven to be highly successful on other areas of the forest in promoting aspen regeneration and protecting young seedlings from browsing by elk and deer.

The protective fencing funded by the grant will enclose aspen in 11 separate areas across the district. Construction of the fences began this month and will continue through September. Once erected, each of the field fences reaches about 7 feet in height and protects aspen generation, known as suckers, from browsing by large herbivores.

“This fence protection is absolutely critical to protect young suckers from elk browsing,” said silviculturist Alvin Brown. “Lower elevation aspen clones are in serious decline throughout the forest, and without these restoration efforts, will continue to rapidly disappear from the forest environment.”

Over the last 15 years, there has been a serious decline in aspen across the Kaibab National Forest. This decline has resulted in 60 to 95 percent mortality of low elevation (less than 8,500 feet) aspen. This is of particular concern on the southern portion of the forest where aspen is limited in quantity and is often found in small, isolated patches.

While the reasons for aspen decline are not fully understand, there are a variety of factors at work including weather and climate events, lack of frequent fire on the landscape, insects and disease. When aspen dies back, it attempts to develop new aspen by resprouting from the roots of the older trees. This is how aspen maintains its populations across the forest over time.

Heavy elk and deer browsing has eliminated almost all of the new aspen sprouts that have attempted to develop in declining aspen stands on the southern portion of Kaibab National Forest. This has seriously impeded the ability of these declining stands to regenerate and perpetuate aspen across the forest.

“That’s why these fences are so important,” said silviculture technician Woody Rokala. “You can see the difference inside the fence. We are basically creating a nursery for the young aspen to grow.”

The current construction of aspen fencing is part of a larger effort by Kaibab National Forest to protect and restore aspen sites. Besides fencing to prevent browsing, the forest has also worked to remove other tree species that exist within and around aspen sites. These other tree species compete with aspen for sunlight, nutrients and water. Their removal increases the vigor of the aspen. This treatment is known as aspen release.

Aspen trees aren’t just valuable for their good looks and the sweet-sounding stirring of their leaves. They are also considered islands of habitat diversity amidst a sea of conifers because they support unique invertebrate communities that, in turn, increase the abundance of many species of birds.

“Aspen forests are widely recognized for their importance as biologically diverse wildlife habitat, as well as their aesthetic and recreational values,” said silviculturist Mark Herron. “These values are at risk on the Williams Ranger District because aspen conditions have been declining. We want to preserve this desirable tree species for future generations and for the wildlife species that use them.”

The aspen restoration work is one of three projects on Kaibab National Forest receiving funding through the partnership of the National Forest Foundation and the Salt River Project. A total grant of $98,144 was awarded to the forest, with funding also going to reforestation efforts on the Tusayan and North Kaibab ranger districts in areas burned by wildfire.