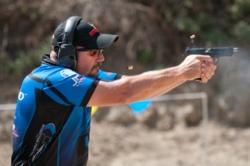 Seeklander, who is a firearms instructor at the U.S. Shooting Academy, won two of the eight stages on his way to posting a final time of 99.73 seconds, placing him 22nd among all shooters in all divisions. He also finished eighth in the Limited Pistol event with a time of 102.10 seconds.

Leatham finished 23rd overall and second in Production with four stage wins and a final time of 100.19 seconds.

Third place in the Production contest went to Houston Shaw of Lake Cormorant, Miss. who finished with a time of 105.78 and one stage win.

Celebrating its 30th anniversary this year, the Steel Challenge World Speed Shooting Championships has served as the unofficial proving ground for the latest shooting equipment and determined who within the shooting sports community is truly the fastest of the fast.