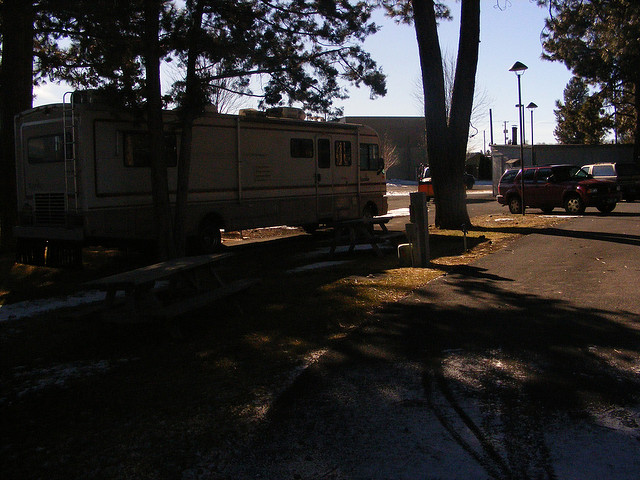 Governor Rick Snyder has proclaimed August as Michigan RV Month, and no one is celebrating more than Malia Lane.

Lane, of Austin, Texas, was first introduced to RVing by a friend and immediately was smitten with the feeling of freedom as well as by the sweeping views through the RV’s windshield. So much so that in 2001 Lane found herself at one of life’s crossroads – pondering whether to play it safe, stay in Austin, and continue her longtime career as a legal assistant or chuck it all for a life on the road.

Lane chose the road less traveled, bought her own RV and hit the highway. Since then she’s made the road and her 36-foot Winnebago Itasca her home and has never looked back. “I decided I’d buy a house and drive the house around while picking up temp jobs as a legal assistant,” Lane said.

She currently earns an income as a writer and a virtual assistant while traveling throughout the country as a fulltime RVer exploring the back roads. So far, Lane has visited more than a dozen states while she writes for RV magazines and maintains a website. She writes two online blogs about her experiences and is expanding her online business.

Although Lane is the first to admit that a woman driving a Class A motorhome and towing a Ford Escape is a rare site on the roads, she says she doesn’t feel alone and takes each day in stride, diligently chronicling her experiences whether they’re the good (the wonderful staff she’s met in state parks); the bad (losing the front axle on the Escape); or the ugly (a mouse scurrying across the floor of the RV) for the hundreds of people who follow her adventures online. She estimates her website gets between 800 and 1,000 hits a day.

Lane initially came to Michigan to meet with clients and kicked off her Michigan tour June 4 at Holly Recreation Area (in northern Oakland County), where she met up with Maia Stephens, recreation programmer for the Department of Natural Resources’ Parks and Recreation Division. Lane was directed to Stephens when she first contacted the DNR seeking information on what to see in and around state parks.

“Malia is working her way around the perimeter of both peninsulas, stopping at preplanned intervals to spend a week or so at each state park on her itinerary,” Stephens said. “She’s about half-way around and expects to conclude the trip sometime in October. She’s presently guiding her readers through an up-close-and-personal look at Michigan, offering tips on where to stay, the best campsites for the easiest setups, and scenic attractions along the way.”

Stephens said that the Parks and Recreation Division has posted a link from its state parks website (www.michigan.gov/stateparks) to Lane’s blog so readers can follow along.

Lane said Mackinac Island has been the top spot on her tour — so far. She recently set up her base camp at Straits State Park in Mackinaw City for daily ventures to the island, where she immersed herself in the spectacular views, the vintage architecture and the historic re-enactments at the 1880s-era Fort Mackinac. The park’s proximity to the St. Ignace Deer Ranch and the Soo Locks at Sault St. Marie helped round out her day trips.

Running a close second was Lane’s stay at Harrisville State Park in Alcona County, where she lucked into one of the highly coveted beachfront campsites for a night and enjoyed the Lake Huron breezes and views of the half-mile stretch of park beach.

Lane also shared tales with readers of her pleasant 10-mile bike trip along the dedicated bike path between Hoeft State Park in Presque Isle County and Rogers City. She says Hoeft, with its dunes and enchanted-forest feel, made it a Michigan memory she’ll always treasure.

Lane makes a point of getting to know the parks’ staffers, who look out for her when they learn she’s traveling alone.

“I tell people I feel safe,” she said. “There are park rangers around and I tell them I’m a woman traveling alone when I check in, so they know.”

She said she also keeps her cell phone charged and knows her position at all times.

Her goal is to inspire other women to fulfill their own dreams, saying many women have told her she has inspired them to do things like go back to school.

“When I first bought the RV, my mom’s comment was, ‘You’ve done some stupid things in your life – this takes the cake,’ ” Lane laughs. “Now she thinks it’s the best thing ever.”

To follow Lane’s Michigan trip, visit www.michigan.gov/stateparks and look for the “Malia’s Miles” link under Camping and Recreation