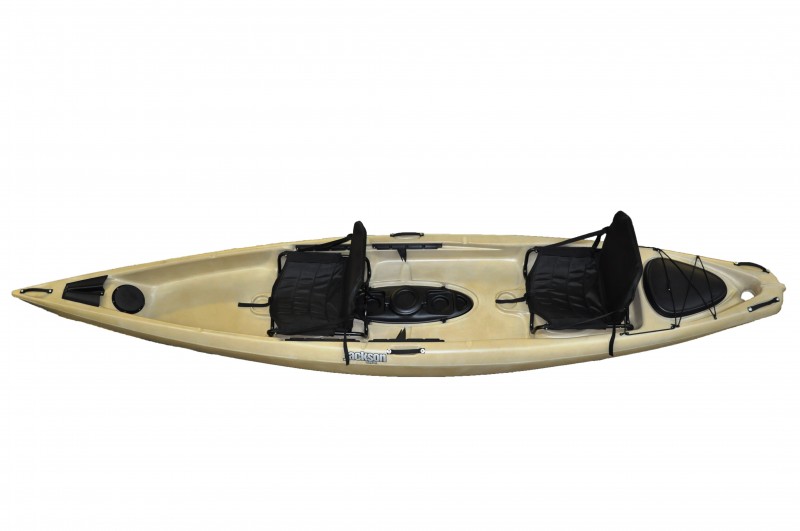 The ‘Cuda is the answer to the big water fisherman’s dream because it has both the speed needed to trek long distances quickly, and the rare ability to be stable for standing when you get to your destination. However, you may not want to stand due to the comfort of the elite hi/lo seat. The option to move the seat high or low depending on your preference and fishing environment, and the ability to remove it from the boat, makes it one of the top seats on the market today.

Similar to the Coosa, the Jackson Kayak team has once again pep­pered slick, angler friendly features throughout the boat. The ‘Cuda will introduce for the first time Jackson’s rod tip cover, tackle stag­ers, fly rod stagers, safety flag, stand assist handle and a 26-inch center hatch that can have an insert to make it dry storage or a fish cooler big enough to fit a beautiful slot redfish. The optional hatch insert can be removed for easy access to the interior of the boat and for easy rod storage while on the water. Of course the previously introduced features are also there including the rod stagers/holders that are big enough for offshore rods. Fans of the Jackson fishing line will also recognize the removable skid plate, large bow and stern hatches and a new and improved beverage holder.

The Big Tuna is a creature unlike any other on the market, with multiple never before seen features in the kayak fishing world. Leading the charge on these unique elements has to be the ‘Tuna Tank,’ a unique bait/live well that requires no plumbing or electronics. It utilizes the wa­ter from beneath the boat to circulate into the bait tank keeping fish lively and fresh. The tank also resides in the center of the boat for easy ac­cess and management. The possibilities with the Tuna Tank are endless – bring the kids on a trip and have them catch cool creatures and learn about them while in the tank; keep your catch alive to show it off to your friends later before you release it; keep your live bait alive and fresh.

Jackson Kayak also brings the popular elite seats, and new ‘Face time’ seating! Simply rotate the front seat around to face your part­ner in conversation while drifting some fresh live bait from the Tuna Tank. Guide your friends, children and clients to the fish of a lifetime by controlling the boat from the rear seat while they enjoy the ability to fish without the worry of paddling. Of course, sometimes you can have too much face time and that is why the architects at Jackson Kayak have made the Big Tuna easily convertible and fishable as a solo boat as well.

Drew Gregory, known as “BasserDrew” to many, is a professional kayak angler and an expert in bass fishing America’s rivers and creeks. Drew hails from Atlanta, Ga., and currently resides in Charlotte, N.C. He has been river fishing since he could handle a rod and reel, but for the past nine years has been pioneering the sport of kayak fishing in freshwater rivers. Standing up and fishing out of his signature series kayak, the Jackson Kayak Coosa, for smallmouth, largemouth and shoal bass is his passion. Gregory has logged more than 700 river kayak fishing trips and is the co-founder of RiverBassin.com and the River Bassin Tournament Trail (RiverBassinTrail.com). Visit www.DrewGregory.com