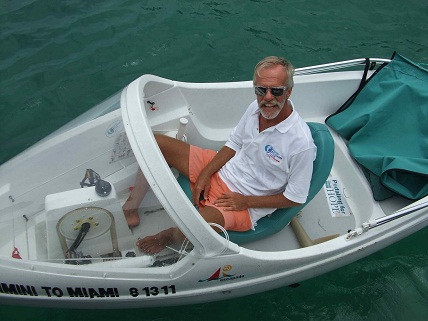 Alice Town, Bimini August 15, 2011 — If not for a violent thunderstorm, Bill Boes from Stuart, Florida would have completed a record-setting journey to pedal boat from Bimini across the Florida Straits to South Florida. The epic journey, which started in the early morning of Saturday, August 13, from the Bimini Big Game Club in Alice Town ended abruptly that evening when Boes, just a few miles from Pompano Beach and victory, was hit head on by a savage thunderstorm.

It got worse and worse, said Boes, who had pedaled for hours in the boiling sun across the Straits to within just 10 miles of his goal. I thought I would lose it, he said. Companions in a sailboat following Boes and his Stella Mae, a 12-foot pedal boat, decided to bring the 61-year-old aboard, thus ending the world record attempt. Had he completed the trip, Boes, an asthmatic with one kidney and battling arthritis, would have become the oldest person to cross the Straits of Florida by pedal boat. Record non-withstanding, Boes goals were to raise awareness for human powered vehicles and money for the House of Hope, which provides food and services to the needy in Martin County, Florida. To learn more about Boes and to support the pedal challenge, please go to the Facebook page Pedal to Bimini or call Debra Scott at 561-318-1271.

The Bimini Big Game Club (www.biggameclubbimini.com), which reopened last year, is located on the main navigation channel in Bimini Bay. The resort currently features 51-rooms and a 75-slip marina capable of accommodating boats up to 145 feet in length.

About House of Hope:

House of Hope in Stuart, Florida, is a vital nonprofit community service agency providing a large food bank, clothing and furniture, emergency financial assistance and case management to those in need in Martin County. More information is available at www.hohmartin.org.