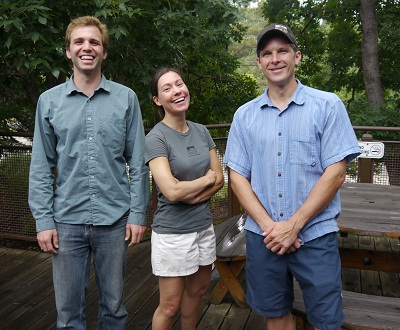 The Access Fund is pleased to announce new additions to the Programs Team to further assist the American climbing community with access issues and stewardship projects nationwide. After ten years as Policy Director, Jason Keith is transitioning to half time work for the Access Fund as Senior Policy Advisor and initiating his own LLC, Jason Keith Consulting. With additional support from major donors, the Access Fund is fortunate to retain Jason Keith for the next two years and welcome Robert Dennis (“R.D.”) Pascoe to the team as a full-time Policy Analyst. Two other changes also mark the past month for the Access Fund: Zachary Lesch-Huie starts this fall as Affiliate Director, and Jenny Blackmore, previously Office Manager, is heading up new and ongoing stewardship programs as Stewardship Manager.

R.D. Pascoe graduated from Colorado State University in 1997 with a B.A. in Philosophy. He operated his own arboriculture business for several years before attending the University of Wyoming, College of Law, where he practiced criminal law as the Student Director of the Defender Aide Program. After law school, R.D. worked for a large civil litigation firm in Cheyenne, Wyoming. In 2010, R.D. started a general practice in Fort Collins, Colorado. As a founding member of the Northern Colorado Climbers Coalition, he helped re-start the Horsetooth Hang in Ft. Collins. As Jason Keith focuses his efforts on major federal land initiatives and climbing policy, RD will expand on the Access Fund’s capacity to tackle local, state, and regional access issues.

Zachary Lesch-Huie, who will start as Affiliate Director this August, is well-versed in outreach and communications due to his work at multiple land conservancies in North Carolina. Zachary will utilize his experience to strengthen the national affiliate network of local climbing organizations and volunteers. As Vice-President of the Carolina Climbers Association, his contributions to climbing access include spearheading the Rumbling Bald boulders acquisition and mobilizing support for greater climbing access in Chimney Rock State Park.

Within the office, Jenny Blackmore has taken on the position of Stewardship Manager. As the point-person for organizers and volunteers, Jenny coordinates all stewardship events and stewardship education programs, including Adopt a Crag and TeamWorks. In partnership with Jeep, Jenny will also oversee the newly launched Conservation Team as they host and attend stewardship and conservation events throughout the nation.

Joe Sambataro, Access Director, will continue to spearhead Access Fund Land Conservation Campaign projects and assist local communities with access issues on private lands. “As the Access Fund celebrates its 20th Anniversary, we are excited to build upon the organization’s long history of success while taking critical steps to expand and launch new programs,” says Executive Director Brady Robinson. “We are now even better positioned to assist local climbing communities with the challenges and opportunities facing local climbing areas.