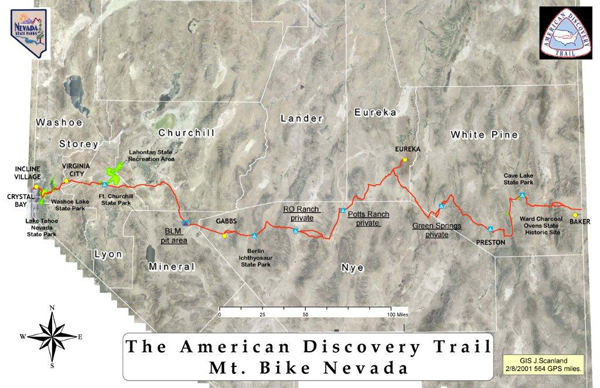 The Discovery Trail is a 6,800-mile, coast-to coast route. Nevada’s portion starts in North Lake Tahoe, at the Nevada-California border, and ends at Great Basin National Park near Baker, Nev.

Ultra-runner Brian Stark, author of the book “Getting to the Point in a Dozen Pair of Shoes,” finished a 500-mile run across Nevada July 24. His record was 11 days, seven hours and 28 minutes for 490 miles. He climbed 34,000 feet and crossed 15 mountain ranges and six State Parks. ADT is challenging runners by advertising in running magazines, on blogs and in other social media to beat Stark’s record in Nevada.

Other events are being held to promote the statewide route in August and September.

Trevor Oxborrow, of Nevada Trail Expeditions based in Reno, is being supported by ADT, State Parks and the TRIGON Mt. Bike Company, on a record-setting race across Nevada that will be used as a challenge for others to beat.

The Backcountry Horsemen, a national equestrian club with chapters in every state, are completing two sections of the ADT the weekends of September 3 and 10. They will be traveling from Tahoe Meadows near Mt. Rose through the Tahoe backcountry and then to Carson City. The other section is the Arc Dome Wilderness section over the Toyiabe Range. Information is available at www.bchnv.com.