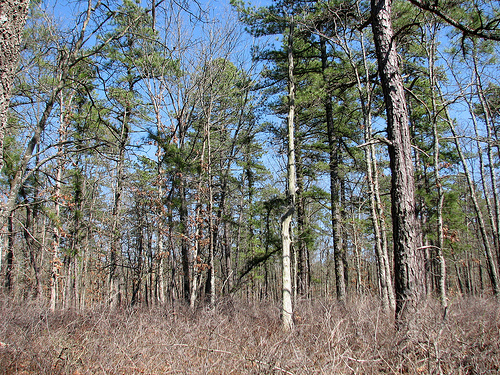 TRENTON – The Department of Environmental Protection continues to battle the southern pine beetle in the Pinelands this summer, forming partnerships with local governments to identify and attack outbreaks, conducting weekly aerial surveys to assess damage and pinpoint suppression efforts, and using a federal grant to develop a plan for further suppression efforts that may include controlled burning of infested woodlands.

“The infestation this season is on pace to equal or possibly surpass the estimated 14,000 acres that were killed last year,” Commissioner Bob Martin said. “We are stepping up our efforts to protect this unique ecosystem, building partnerships that will ensure early detection and rapid response to outbreaks.”

The New Jersey Pinelands Commission, the state agency charged with protecting the million-acre Pinelands National Reserve, has pledged to work closely with the DEP, recently authorizing the emergency cutting of 300 acres of dead and dying pine trees on state-owned lands in the Pinelands.

“We are doing everything we can to cooperate with DEP and assist them in their efforts to combat this significant threat to the resources of the Pinelands,” said Pinelands Commission Executive Director Nancy Wittenberg.

Some 70 percent of the outbreaks are taking place on private lands, so it is critical that everyone keep a sharp eye out for signs of infestation so appropriate action can be taken to pinpoint and isolate hot spots before the beetles spread, said Amy Cradic, Assistant Commissioner for Natural and Historic Resources.

“Our best defense is to seek out and respond to hot spots of activity before the beetles have a chance to expand their destructive activities,” Cradic said.

The beetles are about the size of a grain of rice. Infestations are marked by the sudden onset of yellowish needles that quickly turn brown. Infestations usually are not recognizable until small stands of trees are affected. The bark of infested trees may show numerous excretions of yellowish-white sap oozing from tubes that the beetles bore into the bark.

Pesticides are not effective at large-scale control of the southern pine beetle. The DEP’s primary strategy is to identify affected stands, or hot spots, and cut down the affected trees before the beetles spread. The beetles become disoriented by the horizontal position of the trees and do not spread.

To bolster these efforts, the DEP is:

The southern pine beetle, which is not native to New Jersey, bores into the bark of pine trees, laying eggs in tunnel-like galleries in the thin cambium layer, which carries nutrients and water to the tree.

These galleries and feeding on bark that is done by hatched larvae cut off the tree’s supply of water and nutrients, causing it to die within a matter of weeks. The species of tree most affected in the Pinelands is the pitch pine, the dominant tree throughout the region.

The infestation last year was the worst year on record since the pine beetle was first detected in New Jersey a decade ago. Previous infestations have primarily affected forests south of the Mullica River watershed, which straddles the border between Atlantic and Burlington counties.

Infestations, however, are now being detected in pockets north of the Mullica River watershed, including state-owned lands that make up the core of the Pinelands preservation area. The DEP’s Division of Parks and Forestry continues to cut stands of affected trees on state-owned lands in the Pinelands, and is working on plans for removing dead trees and reforesting affected areas when feasible.

“We have our work cut out for us,” said State Forester Lynn Fleming. “We will continue to aggressively attack outbreaks where we find them, but we will also need help from the weather this winter. Extended periods of extremely cold weather greatly reduce numbers of over-wintering pine beetles and their eggs, larvae and pupae.”