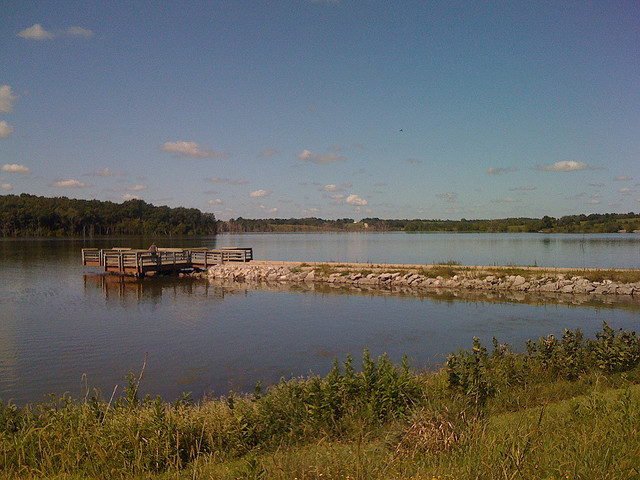 HARLAN – The process of draining Prairie Rose Lake ahead of the $3 million restoration project will begin early next week. Once the water control gate is opened, the water level will fall about three feet per week, until the lake is completely drained sometime after Labor Day. Boat ramps will likely not be usable after August 1.

Bryan Hayes, fisheries biologist with the Iowa Department of Natural Resources for Prairie Rose Lake, said the next two years of the project include modifying the spillway to prevent carp from entering the lake, fixing the gate valve, placing riprap along shore to prevent shoreline erosion, and installing fish habitat and fishing jetties.

“The project has been going on since 2008 but most of the work has done behind the scenes,” Hayes said. “Beginning next week, the progress will be much more visible.”

“Our goal is to minimize the time that the lake is down, so the plan calls for mechanical dredging while the lake is down then switch to hydraulic dredging in future years. We will hopefully be putting water in early next summer,” he said. “One important piece of the puzzle is to put more storage capacity in the wetland east of the highway so it will function as a sediment and nutrient trap, as intended.”

The DNR is partnering with the Iowa Department of Agriculture and Land Stewardship, the Shelby County Soil and Water District and the Natural Resources Conservation Service on the watershed portion of the project. David Brand serves as the Prairie Rose water quality project coordinator. The renovation plan is based on a 2008 lake study and recommendations from Iowa State University.

“We have worked with landowners in the watershed to install 40 miles of terraces, install grassed waterways, and to better manage nutrients on the land,” Hayes said. “We purchased a containment site last year where the dredge material will be deposited, hopefully beginning in late fall.”

The lake protection features installed in the watershed should extend the benefits of the in lake work far into the future. “Our goal is to improve the water quality that will get Prairie Rose off the impaired waters list and have a sustainable, healthy lake system,” Hayes said.

Prairie Rose Lake is in one of Iowa’s more popular state parks of the same name. The lake has an annual economic impact of $3.37 million and the campground hosts more than 21,000 camper nights per year. The campground and other park facilities will remain open during the project.

“I know it’s no fun to give up fishing your favorite lake but it is necessary to get the lake on the right track. We have a number of examples at nearby parks, of what benefits anglers and park visitors will see after the work is done. Lake Anita and Viking Lake are both experiencing excellent fishing and improved water quality since the projects were completed,” Hayes said.

“We are excited to get this project to the next step, now we will need some cooperation from Mother Nature to keep us on schedule,” he said.

The lake will refill in 2012 and be stocked with largemouth bass, bluegills, crappies and channel catfish. Hayes said they are collecting adult bass from Prairie Rose this week that they will hold until next summer to encourage reproduction early on. He said they will also stock larger fingerling bass and catfish to jump start the fishery.