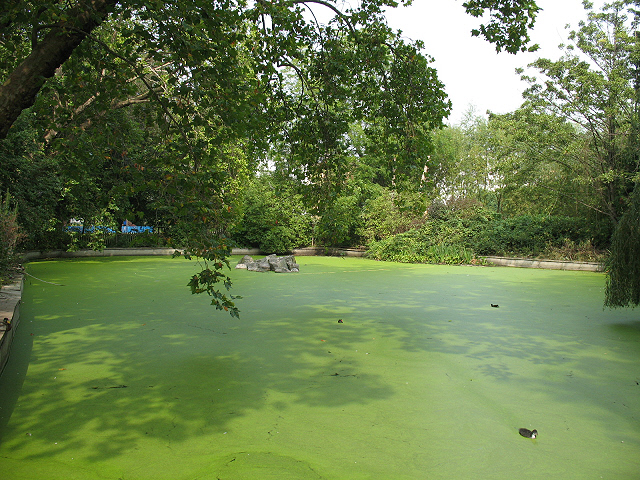 COLUMBUS, OH-Scientists have discovered samples of harmful algae farther from Lake Erie and earlier in the year than they expected. In a two-year project, Dr. David Culver of Ohio State University and Dr. Doug Kane of Defiance College found Microcystis, cyanobacteria that produce toxins, in small tributaries as far as 50 miles away from the lake in April. The scientists are collaborating with other researchers and managers to try and solve the problem.

Microcystis, the most commonly occurring harmful algae in Lake Erie, has produced toxins reaching levels three times above the recommended limit for swimming beaches in areas of the lake. Harmful algal blooms turn the water into a smelly green soup that endangers the $11 billion that tourists spend in Ohio while visiting Lake Erie. To make matters worse, as Microcystis dies and decomposes, it consumes oxygen from the water. “Dead Zones” form in parts of Lake Erie’s Central Basin where oxygen levels drop too low to support the walleye, yellow perch, and other aquatic life that have made Lake Erie an angling destination.

The main fuel for this algae is phosphorus that washes into the lake from agricultural field fertilizer and animal manure. Lake Erie receives more nutrient runoff than the other Great Lakes because its watershed consists mainly of agricultural fields and urban areas.

Until now, Lake Erie scientists haven’t looked for Microcystis upstream in the lake’s tributaries. It was thought that only phosphorus and other nutrients wash into the lake and fertilize the Microcystis already in the lake. That’s true, but Culver’s and Kane’s work shows that a significant amount of algae itself may enter the lake along with the nutrients.

Culver’s and Kane’s work is part of an effort led by Ohio Sea Grant and a bi-national team of 15 scientists from 11 institutions, agencies to reduce phosphorus loading into the lake. The group of researchers and ecosystem managers has created a report that synthesizes findings from seven research projects supported by grants from the U.S. Environmental Protection Agency and the Ohio Lake Erie Commission. The report, available atgo.osu.edu/phosphorus, uses layman language to explain findings from the research and their management implications to head off the algae and restore Lake Erie.

The lake faced huge algal blooms 40 years ago that scientists were able to shrink by reducing the amount of phosphorus and other nutrients that ran off into the water. By the 1980s, the lake was beginning to thrive again, contributing to Ohio’s tourism economy, and becoming the Walleye Capital of the World.