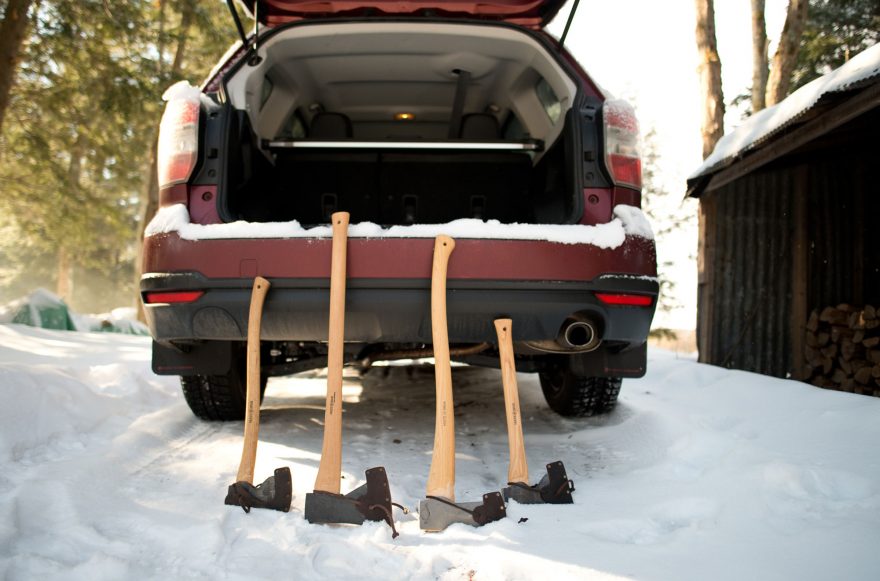 If you swung a premium axe, you’d know it immediately. The grip, the balance, the precision of the edge — nothing from a typical chain retailer usually comes close.

Sure enough, the causal axe user may not care about these finer points, at least not to the extent that an axe enthusiast does. Just as many people want a simple Point A-to-Point B approach in selecting what car drive, for some, using an axe may be just as basic. Perhaps they use an axe only a couple of times a year, or there’s convenience in the disposable nature of plastic handles and low-grade steel.

For someone like this, there’s little thought that goes into the honed functionality of various axes.

“If you look at what’s out there at the hardware store, it tends to be your bulkier, more massive axe made with Asian steel,” said James Graven with Treehouse Communications. “So it’s not going last as long as far as corrosion resistance, and the quality of the materials isn’t as good.”

Graven represents Hults Bruk, long one of the world’s leading companies in premium axe manufacturing. The company’s factory is located in the Hulta River Valley just north of the Swedish city of Norrkoping. In Sweden, a bruk is akin to a “works,” such as an ironworks or coalworks, where a village rises up in support of a central employer. In Hults Bruk’s case, the business started in the late 1600s making nails for shipbuilding before evolving into a forger of axes. 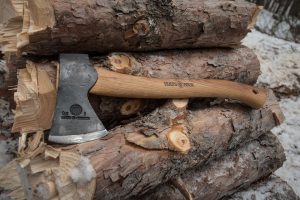 Today, each axe is made from high-quality Swedish axe steel, expertly tempered to hold a very sharp edge even after repeated sharpenings. Hults Bruk uses open-die forging (also known as free forging or smith forging), which is the process of striking a hammer to shape a piece of metal, typically placed on a stationary anvil.

It conjures a true sense of craft and a dedication to generations of quality, blended with more modern innovation and distribution.

It’s why holding a Hults Bruk axe in your hand feels unlike most any other, and the history and artistry of these tools run deep.

What You’re Made Of

Finding the right axe comes down to a person’s needs. For most who are working around their house or homestead, they may want something less specialized and more affordable.

Yet for someone looking for something higher-end, a premium axe is going to have a blade that’s made for mobility and precision.

“Most of the people who are coming to find our products are enthusiasts,” Graven says, and they can readily tell the difference in head shapes and certain features.

Hults Bruk uses Swedish steel, which has a high carbon content. It’s a steel, called HB3, that for the past century has been acquired and made specifically for Hults Bruk. 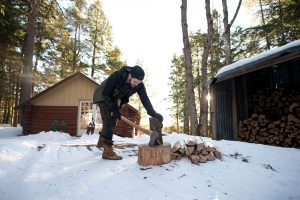 While Chinese or other Asian steels are often made of recycled metal and have inconsistent characteristics, Hults Bruk uses a pure steel that comes from a single source — a mine in northern Sweden. The HB3 steel is milled in Sweden in accordance with European Union production guidelines, which will be higher than what would come out of many Asian nations.

A few generations ago, axe heads around the world were often made from separate pieces of steel folded over onto themselves and welded, but Hults Bruk and many other companies began making axe heads from a single piece of metal in the 1950s. This is generally a better style of construction.

And while Hults Bruk uses the premium open-die forging process to craft its blades, expect that cheaper axes are going to be forged and shaped entirely on a machine.

The open-die forging process is something to behold. When steel is hot and being hit with force, that’s restructuring the atoms inside it. Since the industrial era, this is done with a mechanical hammer rather than a blacksmith’s arm, which doesn’t produce enough force to make the metal as durable as it can be. Open-die forging requires more skill than its counterparts because the worker is shaping the blade head as it’s being put under the hammer. It’s more labor-intensive and more costly, but it’s also more custom and personalized.

“It’s kind of like the difference between glassware,” Graven explained. “You get a handblown piece of glass, and while there are going to be some slight variations, people who are into the art of the craft aren’t going to complain.”

You’ll see the forger’s tong marks, and there may be slight variations in the size of the head. Even after initial rough shaping in the forge, an axe goes through a grinding process, and that’s where even more of the shaping takes place.

“There is a certain conformity that comes with machining something,” Graven said. “Whereas with the Hults Bruk heads, you can usually see the marks of the maker on there.”

It helps to create a connection between the axe maker and the user, and it’s a tradition that high-end axe companies like Hults Bruk are proud of. 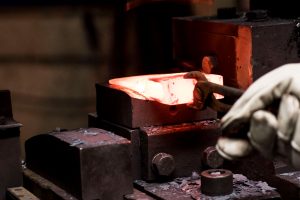 These blades arrive sharp, too, as there is a long understanding of safety that dull blades contribute to slippage and are generally more dangerous.

And HB3 steel isn’t going to rust as quickly as the high-carbon steels found in knives (such as the popular 1090 carbon steel). Knife steel has different properties compared to what you’d want in an axe steel, and the axe steel at Hults Bruk is forged more densely.

“It does need a little bit of care, but not as much as a knife steel,” Graven said. “You beat it up, it gets a bit of rust, you clean it up, and that gives it a bit of character.”

What is particularly amazing is seeing so many tool restoration channels on social media showcase the durability and longevity of Nordic steels. Even highly rusted axes can be cleaned off and reused.

Steel is only one part of axe quality, though. The design of the axe head — and of the handle — is really the key separator between high-end and cheaper axes.

At Hults Bruk, the handles are made of hickory, a dense open-grained hardwood that is beloved by toolmakers. 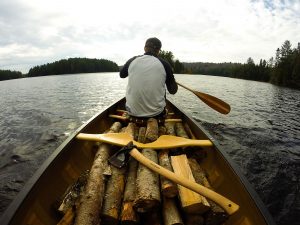 A lot of the head designs are drawn from American innovations dating back centuries.

They are styled after 19th century American felling axes — which includes the cutting edge, the beard and the back of the axe head, called the butt or pole.

Notably, the pole isn’t to be used as a hammer — this piece of the tool intentionally is not hardened, in order to allow the metal some flex and prevent cracking throughout the axe head.

Instead, the pole acts as a counterbalance, which was an innovation to American frontier axes. It’s unclear exactly where it was introduced, but blacksmiths were using that design around the 1700s. The old trade axes that the Europeans brought over to the New World didn’t have it, as those tools hadn’t been built to handle the hardwoods that were common on this side of the Atlantic.

“American ingenuity was to reshape the axes to have a bigger chunk of metal on the back,” Graven said. “If you don’t have a balanced proper axe, it’s not going to be a good swing.”

Match the Tool to the Task

Choosing an axe specific to a person’s needs can be a difficult task — one made even tougher by the variety of styles and differences in ratings within brands themselves. Hults Bruk, for example, has more than 15 axes in its product line, including forester’s axes, carpenter’s axes, and hatchets. The company even has a double-bladed axe, though that is largely for nostalgia than for modern-day functionality.

People may use axes for utilitarian reasons (clearing trees and chopping firewood), for crafts (carving a paddle or longbow) or in urgent or crisis situations (survival shelter-building or chipping out a car frozen in ice).

“If I had to pick a single axe to take out there with me, it would be the Aneby or the Almike, and that’s because it’s a longer handle that’s going to give me more leverage,” Graven said. “So I’d be able to do a little bit of everything with it.”

The Aneby measures in with a 20-inch handle, while the Almike is smaller at 16 inches. Thicker handles on an axe are more durable and intended for heavy use, but they’re generally not as comfortable. In contrast, thinner handles offer the user some flex but may be more prone to breaking. 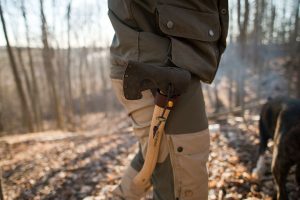 Still, it largely depends on the skill and strength of the user, as well as how much time they want to spend with a tool. Smaller axes are suited to tasks like processing game, and while they can certainly be used to split wood or tackle smaller trees, they don’t replace the effectiveness of a splitting maul or a longer-handled forester’s axe like the Akka.

Additionally, narrowing down the right blade means paying attention to the shape of the blade. For example, the Aneby and Almike each has a turpentine pattern, including a finger notch and tending to be a narrower than others. Notches like these provide an ideal spot for one’s hand to choke up.

Carpenter’s axes, too, will have finger notches in the head to aid in precision work, including wood carving.

Such carpenter’s axes, like Hults Bruk’s Tibro, are akin to hewing axes and are adept at flat cuts. Their history includes eras involving the creation of the transcontinental railroad though Wyoming and the White River Forest in the 19th century. Crews at the time were making railroad ties by hand — they’d start by using a massive felling ask for the lumber, but then they’d use large hewing axes to rough out and straighten the ties. 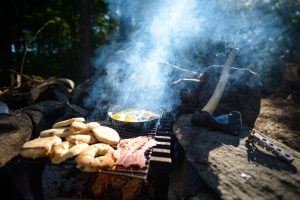 Finding the right axe means finding a tool that lowers fatigue and that you can spend time taking care of the wood and steel properly.

“It’s like buying a good kitchen knife or any real quality tool: If you spend $100 or $200 on something, you’re also going to want to spend money on oil, a sharpening stone, a file, so that you can take care of it,” Graven said.

Ryan Tipps is Managing Editor for ActionHub. He lives along the Blue Ridge Mountains, is an avid hiker, backpacker and trail runner and has been a part of the wilderness search and rescue community since 2005.