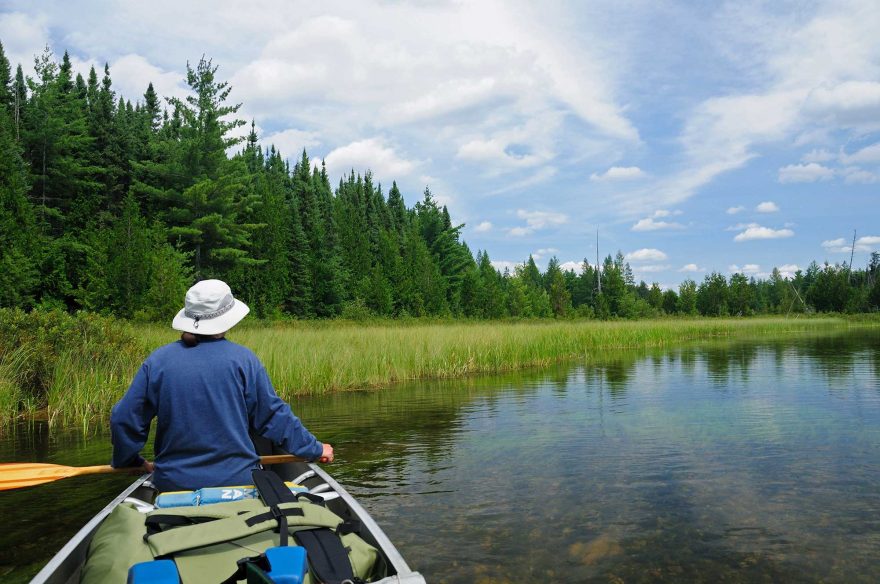 Many decades ago, my dad and I purchased a Grumman canoe (I still have it and use it). In the intervening years, I’ve logged countless hours and miles paddling on lakes and streams. This is what I’ve learned about selecting canoe paddles for such use.

Canoe paddles are sold in 2-inch-length increments. Ideally, with one hand at the grip on the top of the paddle, the other hand should be on the throat (where the shaft meets the blade). If you have a canoe in the water, sit in the canoe, put the entire blade in the water. If the grip is level with your chin or nose, that’s the length paddle you should have.

In a store, squat until your bottom is 6 or 7 inches off the floor. Turn the paddle upside down. With the grip on the floor, the throat of the paddle should be even with your chin or nose.

The idea of the bent shaft, used with the bend thrusting forward, is to keep the blade perpendicular to the surface during the stroke putting more energy into moving the canoe. I have no scientific evidence and have seen heated discussions advocating for and against the bent shaft. My preference, however, is to use a bent shaft paddle in the bow and a straight shaft in the stern. Bow paddles should be a couple of inches shorter than stern paddles. The straight shaft, in my view, is superior for steering.

The traditional shape for paddles blades is rounded, called a beaver tail. If the length of the blade is held constant, among the dozen or so paddles I have, the surface area is about the same (remember how we learned to measure area in high school geometry?). Blades range from 20 to 25 inches. If you paddle correctly with the entire blade in the water during the stroke, larger paddles generate more power and require greater exertion. Consider the size of the blade in selecting a paddle.

Probably because I’ve done it this way so long, my favorite paddle is a beavertail. 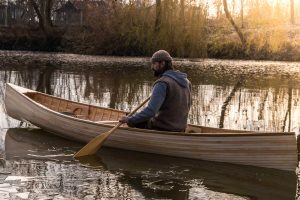 Aluminum paddles with plastic blades are lighter than wooden paddles. After several years use, one of the blades on an aluminum shaft paddle I owned broke deep in the bush of Ontario’s Quetico Park. When I examined the other paddle in the pair I bought, that blade was badly cracked. I have not used an aluminum and plastic blade paddle since.

Graphite paddles are the lightest and most expensive of all. I have only used such paddles on short, experimental paddles out in the lake and back.