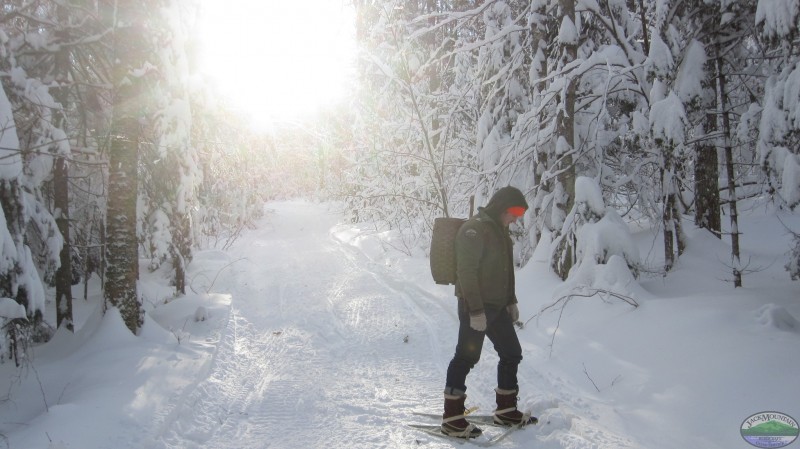 If you're going outdoors this winter. you owe it to yourself to properly prepare for potential survival situations.

Fire was my saving grace as a kid, camping in the dead of winter with a few friends on our breaks from school.

We would often only sleep a few hours at night due to thinly-insulated sleeping bags, waking up well before dawn shivering to the bone before scurrying to get a bed full of embers from the evening before hot enough to ignite. Huddling near the fire until the sun peaked, nursing our ice sickle-like fingers back to life was fun to us, and just another excuse for stories and ribbing among the group.

But looking back, I cringe at the lack of concern by my adolescent companions and I. Even though we were often only a short distance from civilization and the warmth of a bed, the situation could have easily turned for the worse.

What if one of us was injured and couldn’t reach help? What if we unknowingly started to develop hypothermia?

It’s regularly those situations that get people into trouble in the backcountry. A lack of experience coupled with the “it can’t happen to me” attitude can turn an outdoor excursion sour at anytime of year. Add in the brutal nature of winter’s extremes and suddenly a survival scenario doesn’t seem too far-fetched.

Even now, as fall is beginning to give way to the unrelenting grip of winter in the higher elevations, trekking into the backcountry should be treated with the utmost respect—of nature and taking time to remain educated on wilderness survival.

Smith knows extreme cold. He’s the founder of the Jack Mountain Bushcraft School in Maine and has been leading a wilderness living course during winter since 1999. His time spent outside when the mercury dips below zero has helped him develop an innate sense of respect for nature’s most brutal time of year.

“If you’re out there and it’s 40 below and you get wet, you don’t have hours or days to remedy the situation,” Smith warned, “you have minutes. No matter how skilled you are the cold is relentless. You are going to suffer and pay the price.”

Smith advised preparing for what he calls the survival equation when planning for any backcountry trip during the winter, which includes three parts: maintaining body temperature, drinking enough water, and getting enough sleep to remain rational.

Adhering to the equation works to prevent an excursion from going awry; though Smith said it also is just as important to staying alive if a situation does turn for the worse.

A proper sleeping bag rated to subzero temperatures, a fire and or shelter will help with maintaining body temperature and getting sleep, while an ax—Smith’s go-to tool—and a metal pot can help with fire building and melting snow for hydration.

Melted snow is safe to drink, being distilled by nature essentially, according to Laurel Holding, instructor and director of program development of the Boulder Outdoor Survival School in Utah.

“You will not be able to get very much volume of water just by eating snow and you will lower your core body temperature slowly but surely by melting it in your mouth,” Holding said. “However, in theory, you can survive for around 72 hours without water and of course exposure can kill you in two to three hours or less.”

In order to melt snow, though, there has to be a heat source—fire—to do it.

But a task as simple as making a fire can prove to be a headache during the winter with damp wood and cold fingers.

Wood and kindling will be the ambient temperature when gathered, making generating enough heat to reach an ignition point harder than when in warmer climates.

In cold climes. generating enough heat to get your wood and kindling burning will be harder than when in warmer environments.

“You’re going to need to be sure your fire making skills are [adequate],” Holding said. “You need experience dealing with materials that might be cold, have moisture in them and are going to want to probably have with you tender material that is reliable and you have experience with.”

Holding advised keeping a survival kit on hand whenever in the backcountry—whether on a day hike or a more extended backpacking trip—that includes a reliable fire starting method.

A lighter, magnifying lens, flint, and steel or ferrocerium rod serve as recommended methods for creating the flame, and Holding advised to tote along more than one in a survival pack.

Store-bought tender is readily available, but something as simple as cotton balls soaked in petroleum jelly is highly flammable and holds a flame long enough to ignite damp kindling.

Of course, gear can only get one so far during a winter survival situation. Knowing how to properly use those gadgets as well as natural materials goes a long way.

“Determination and humility are huge, even if you have the world’s greatest gear,” Smith said. “If you don’t understand what you need to accomplish…it’s a real challenge to make it back. People who don’t know what they get themselves into aren’t trained property.”

Smith’s attitude to preparation is simple: basic survival knowledge can be learned through reading a few paragraphs, and it’s no excuse to not be at least moderately prepared—read a book, take a class, or watch online videos and then practice those skills.

Though sometimes, enduring a survival situation can boil down to even simpler matters.

“I would always say the most important thing is letting somebody know what your plan is and your itinerary,” Holding said. “That way, even if you have to be in a survival situation, at least its’ going to be short term.”

Injuries and unexpected scenarios cloud judgment and incapacitate people; in some cases, that works to render any gear, technology and perhaps training useless. So it’s always best to combine a solid survival skill set with an emergency contact ready to call for help.

No one anticipates fighting for their lives during a casual backcountry trip, but it happens. So as fall transitions to winter, prepare and pack adequately so the only killer surprises along the trail are amazing vistas.