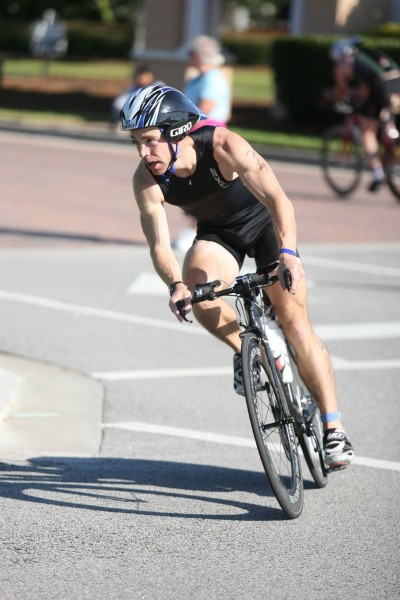 A triathlete competes in the cycling segment of a triathlon, which are comprised of swimming, cycling, and running.

Composed of swimming, cycling, and running segments in its most popular form, triathlons are meant to test the human body in a variety of mediums with speed being the focus of each. Included in the overall time met by each triathlete is their transition time between each event that is used to change equipment and clothing. Participants are grouped based on age, while a number of elite triathletes compete with only each other. A strict set of rules is implemented into each event, and the consequence of breaking any falls within a range of time penalties depending on severity, but can also lead to disqualification.

Some of the rules include that if triathletes leave the course, they must reenter in the same location before continuing. In addition, there must be no audio devices, no glass containers, and no assistance from those who are not race officials. Make sure to check out the official rule book for the specific triathlon you will be participating in. It is recommended to begin with the Sprint triathlon if you’re a beginner, as the shorter distance will allow for acclimation to the competition before longer routes are attempted.

Chaos begins in the first section of the competition, as people are in close space while in the water, with each person trying to find their own route. The swimming portion allows participants to use whatever stroke they prefer. If you get tired, you are able to stand if the water is shallow enough, float on your back, or even tread water when a break is needed. It is not permitted to wear any sort of swim assistance such as gloves or flippers, but goggles are allowed. Swimmers are able to hold onto a boat or other object, but using these to kick off from is prohibited, as it would give an unfair advantage.

Next comes the biking segment, which cannot be started until the participant has fastened their helmet strap. Each biker has what is called a “draft zone” that is created when people are riding near one another. Triathlons have different rules for drafting–in some drafting is completely illegal, others have time-sensitive criteria. For example, some rules state that if you are in someone’s draft zone for more than 15 seconds, a time penalty can occur. Riders can benefit from these areas of limited air resistance, so they are often considered “regulated space.” If for any reason you are unable to continue by bike, you are allowed to push or carry it to the next transition. As long as you arrive with your bike, you are allowed to move on to the running segment.

Last is the running portion of the triathlon, where the rules are more basic. Runners are not able to crawl, and if you are injured, you must exit the course and return at the same location if or when you wish to continue. The only other main rules are to keep your bike at a slower speed while in a transition area and do your best in staying out of other triathletes’ ways.

Proper training is hands down the most important factor in being adequately prepared for a triathlon. While many practiced athletes may find themselves attracted to the idea of competing, endurance is what needs improvement in most cases. Training should be a gradual process, gaining speed in each segment over time. Each athlete has a point at which they run out of energy, so slowly working to lengthen that time is the goal. If people try to improve their time too quickly, injuries are likely to occur, which will set back the entire process. Make sure to set time aside for your body to recover from these training sessions, as a tired body is less likely to perform well.

Nutrition is also an imperative part of the training process, as someone who does not eat well is going to have a harder time competing. Along with eating healthy, make sure you are always hydrated. Not drinking enough water is one of the fastest ways to wear yourself out and feel like finishing the triathlon is impossible. Your training regime and the outside temperature, among other factors, all work together to determine how much water consumption is necessary.

Overall, athletes will gauge how best to prepare for a triathlon after they have completed their first one. It’s hard to determine what type of training works best when you haven’t yet competed, so try not to stress too much and count your first several triathlons as learning experiences that will prepare you for more challenging ones down the road.

Image from Mdd31 on the Wikimedia Commons