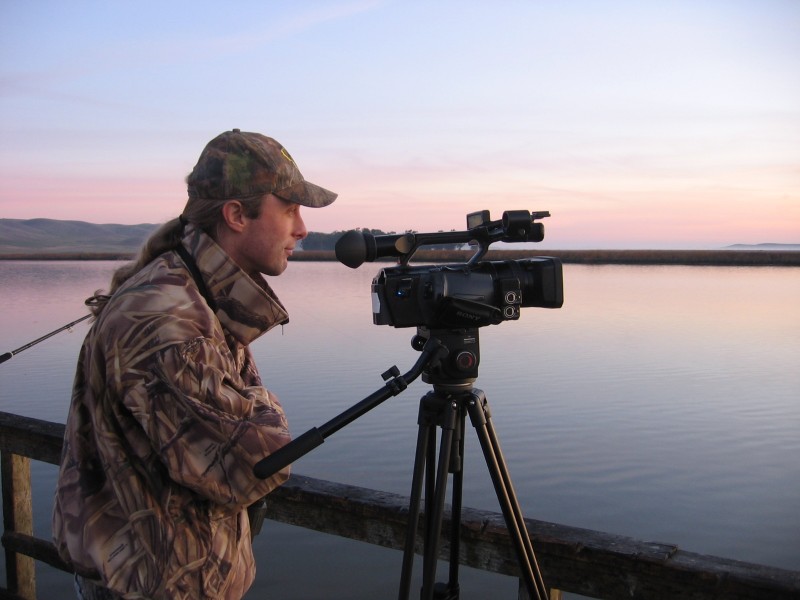 Nature is always filled with surprises. Some of the best entertainment of all comes from watching wildlife. According to the U.S. Fish and Wildlife Service, wildlife viewing is the most popular outdoor recreational sport in America, with somewhere between 65 and 80 million participants–40 million of which fish and hunt. It’s more popular than fitness walking, which is number two, and camping, which is number three with 48 million campers.

Numerous studies have found that being outside in nature is calming, inspiring, and walking in a park or natural area is better for reducing tension than walking a city street. In fact, you don’t even have to go outside to get some benefits from nature. Studies have shown that hospital rooms with windows that look out at trees, gardens, and pleasant scenery speed up recovery time (pdf). To quote Dr. Bernie Siegel from his book Love, Medicine and Miracles:

The ambiance of the clinical environment influences both the attitude of the doctor and patient. I fear that we have lost one of our most important sources of strength–a connection to God and nature–when hospital planning took the windows out . . . A view of the outside world reminds us of our link to nature.

Both of these studies illustrate how important our eyesight is to enjoying nature.

Research also shows that the average person today spends over 90 percent of their day indoors, a good deal of it looking at electronic screens–TV, computers, iPhones, etc. So, after you finish reading this article stop what you are doing and look out the nearest window. If there is not a window nearby, go find one. Even better, step outside. Just let go and drink in what you feel, hear, and see. As an extra benefit, look for any wildlife.

In an earlier article I offered some suggestions about developing your ability to walk quietly in the field and to discern more natural sounds, skills that psychologist Howard Gardner calls “naturalistic intelligence,” which is the ability to be more aware of the different plants, animals, rocks, and physical features around you. To increase your naturalistic intelligence even more, I’d like to help you increase your ability to use your eyes develop more visual awareness of nature.

Your eyes have two kinds of cells in the retina, rods for general vision, and cones for detail. If you’ve been reading a book, or looking at your computer, your eyes have been focused on detail at a close distance. Reading and looking at a screen, you use more of the cones. Let the cones relax. Remember to take a break and just look up for 30 seconds every 10 to 15 minutes.

When you shift into rods-dominant seeing, you let go, take in more of the whole scene before you and details become less important. Using more of the rods, you are engaging in “pattern seeing,” or “soft eyes,” as they say in the martial arts. Don’t focus on anything in particular. Do this for a minute or so. Your eyes will appreciate it.

Now while you’re looking at the whole scene, become aware of the extent of your peripheral vision. How far can you see on either side? Become aware of what’s happening at the far corners of your vision, but still keep your eyes looking forward. Developing awareness of what you see out of the “corner of your eye” is a skill of great value to athletes, as well as wildlife watchers and hunters. Pattern seeing can help you perceive and identify wildlife.

Here’s an example of how pattern seeing helps you perceive wildlife. You’re sitting in a duck blind scanning the horizon. This is a time when the rods take over to enable you to become more aware of the entire tapestry before you. A duck might come from anywhere. You see patterns of clouds, water, sky, and maybe marsh like an impressionistic painting or a woven rug or blanket.

An anomaly in the pattern–a dark moving object, a flying bird–suddenly appears. How fast are its wings moving? You quickly eliminate any large bird with slow moving wings–seagulls, cranes, or herons–so that drops you down one level of pattern seeing. What you are looking for are fast-moving birds with rapid wing beats. When you see that pattern, then you hone in for details on what species, which direction they are moving, and then decide if and when you should try calling–a progression from overall patterns to details.

Simply practicing pattern seeing helps, but there are exercises to help you make better use of your eyes. One of the revolutionary innovators in physical therapy in the 20th century was an Israeli engineer, Dr. Moshe Feldenkrais. Troubled with bad knees from his days as a soccer player, Feldenkrais applied the mind of a mechanical genius to developing exercises to help him regain his ability to walk and exercise. He ultimately became a black belt in judo and wrote the British Army Manual of Self-Defense after healing his knees without surgery.

Feldenkrais realized that we tend to develop fixed patterns of movement, and this limits our movement and perception. So, he developed exercises to break existing patterns of movement and help gain greater control over movements and overall awareness. He helped all the Israeli cabinet stay healthy and eventually, he began to teach his method to many, including many professional athletes and entertainers, who reported that it helped them improve their game, heal from injuries more quickly and get more enjoyment from life.

I had the good fortune to attend a workshop given by Dr. Feldenkrais when he first began to teach in the 1970s. He showed how one of the limiting patterns that many people develop in the neck region is failing to realize how their eyes automatically always lead their head movements. To break this fixed pattern, he would ask people to turn their head in one direction, and mark the place where you could move to comfortably. Then he asked you to look the other way with their eyes as you turned your head in that original direction, breathing out as you slowly turned. At first it would feel awkward, but after a few repetitions, suddenly you realize that you can move your head farther on each turn, and you can move your eyes in all sorts of directions while turning your head, opening up new possibilities for expanding your scope of visual perception, as well as loosening up neck muscles.

To borrow an idea from Feldenkrais, do the head movement and eyes looking the opposite direction slowly three to four times to the right. Now reverse it and turn your head to the left and look to the right three to four times. Your neck movements are probably farther. Now if you go back and adopt “soft eyes” and gaze at the entire scene you may find your peripheral vision has expanded.

Your ophthalmologist is now cheering because they advise you to take frequent breaks for your eyes when you are reading or looking at computer screen, and not get locked into fixed patterns of seeing.

One of the additional aspects of wildlife watching is that when we gaze at a natural area with soft eyes, it’s almost like what you may encounter in your dreams or daydreaming. Plants, animals, clouds, hills, sky, etc. all are forms, and they also they are symbols, reminding you that we are all born of nature and we know this each night in our dreams. We discover wildlife by becoming aware of anomalies in the overall field of vision. Do you see the buck in this picture?

What are your favorite animals, plants, flowers, or trees? People develop affinities for certain trees, flowers, birds, or animals. The totem poles of the Northwest Coast Indian tribes are statements of their special relationships with certain animals.

If you look up your family tree, you may find a special connection to that plant or animal. For example, my name “Swan” comes from Scotland, where the Swans are part of the Gunn Clan. The official plant of Clan Gunn is the juniper. Members of Clan Gunn traditionally wear a sprig of juniper in their hatband. Is it any wonder then that I now live in a forest of junipers?

If you will allow yourself to include intuition as one of the ways that we perceive the world, then in addition to looking at animals and watching them, you may also be “seeing” with their help as all native cultures that I know of believe that animals can be messengers for future events. You may consider any relationship between the appearance and behavior of an animal and a forthcoming event as coincidence, but psychiatrist Carl Jung wrote extensively about apparently chance meetings–“synchronicities”–which seem to happen more when one is in nature, and how they may foreshadow the future.

Personally, in my travels to Japan, when I would walk in the woods with friends–college professors, artists, designers–they looked for synchronous experiences with animals as a sign that we were doing the right thing at the right place and time (see my book Nature As Teacher and Healer for more details on this).

My basic point here is that your eyesight can be exercised and developed like any other part of the body, and that developing your visual skills enables you to get more enjoyment out of nature, and also has health benefits. And just possibly it might even help you catch glimpses of things to come.

Above all, nature is always filled with surprises.