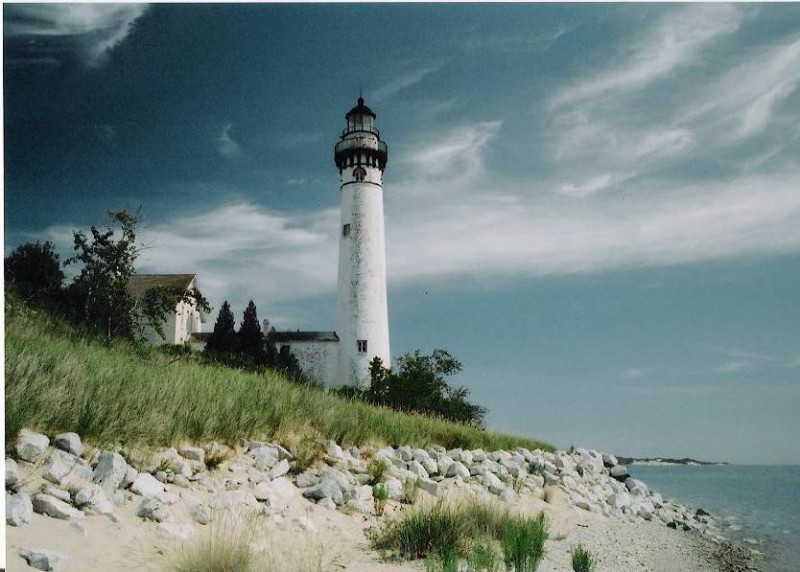 South Manitou Island's lighthouse remained unlit for about 50 years, but has since been in working order in its location on the Manitou Passage.

Day trips or extended stays are offered to people looking to camp or backpack on Michgan’s North and South Manitou Islands. The Manitou Island Transit is the ferry located in Leland that takes travelers to both islands.The round trip rate for adults is $35 and $20 for children under 12 years old.

The ferry to South Manitou takes about an hour and a half, but the view of Sleeping Bear Dunes National Lakeshore along the way makes the ride seem much faster. No food service is provided on the island, so packing whatever amount of food you will need for the day is highly suggested. The ferry docks in the small village on the island, which is also where the ranger station is located. Restrooms and running water are near the entrance, but there are no showers or other full restroom locations on the remainder of the island except for several outhouses. Fires are allowed in most camping locations on South Manitou, but someone on the ferry or the ranger will inform you of the designated areas depending on the time of your visit.

The three campgrounds on the island are The Bay, The Weather Station and The Popple. There is a $5 fee for those who want to have the ferry take them straight to Weather Station. There is no camping permitted beyond these sites, and each site is limited to four people and two tents. Weather Station and Bay each have three group sites, which can accommodate nine to 20 people with a 10-tent maximum.

It is not permitted to bring your own firewood to the island or to take it home with you, but there is a sufficient amount of dead and fallen wood already there.

When arriving on the island, many features to explore await you. South Manitou’s 104-foot lighthouse is located on the Manitou passage, which is the commonly traveled route from Chicago to Mackinaw. It was in working condition from 1871 to 1958, and after being dark for about 50 years, it is now lit again.

The ferry to the northern island takes about an hour in total.

This island has more than 15,000 acres available for campers and hikers to explore, characterized by a more remote feel than its southern counterpart. Backwoods camping is encouraged, but you must remain at least 300 feet away from the Lake Michigan shoreline. The Village, at the front of the island, is the only campground on the island as well as the only place a fire is allowed. Camping in the backwoods is limited to 10 people.

The most common activities on the island are hiking, backpacking, camping, and swimming, with beaches that are easily swimmable without rocky shores. Manitou Island Transit has started to offer two-hour island tours via Kubota tractors that haul wagons.

If you want to plan a trip this summer, make sure to visit the Transit’s website for the specific ferry schedule. Cars can be left in the parking lot for a fee of $2 per day, as well as a park entrance fee of $10. Camping permits can also be purchased at the transit office. It is recommended that ferry tickets be purchases in advance to ensure there will be enough for everyone in your group.

Check out the story about my backpacking trip to North Manitou Island here.

Image from Geoffrey George on the Wikimedia Commons