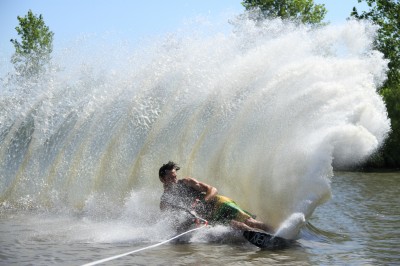 A man slalom water skis, which uses one ski rather than the traditional two.

The sport of water skiing first came about in 1922 by the invention of Ralph Samuelson who began his experimentation with a pair of boards on a lake in his home state of Minnesota.

Although he never patented his creation, Samuelson was the first to discover that the best position in preparation to water ski was leaning backward in the water with the front of each board slightly breaking the surface of the water in front of him. A simple clothesline was used as the towrope and handle that he held on to. He traveled across the United States displaying his skills and teaching others the basics of the sport, which he took to extremes on several occasions, most notably when he hit a speed of 80 miles per hour while being towed behind a World War I flying boat.

His shows left many people in awe of the new water sport, but it didn’t catch on with a vast number of people until the 1940s. Although the legal patent of water skiing went to New Yorker Fred Waller in 1925, Samuelson was officially recognized in 1966 as the first water skier in history by the American Water Ski Association.

The first step in beginning this sport is to choose the right pair of skis. People simply wanting to test it out may look for bargain deals on skis, but make sure to consider safety and comfort when browsing used or less expensive skis. Renting from a surf shop or borrowing from a friend may be the best deal for a beginner because you’re likely going to be using a fairly nice pair without having to invest money in a sport you may not maintain participation in.

After being fitted with the correct pair of skis, it’s time to get in the water. In the same form one should take when preparing to wakeboard, keep your knees bent and close to your chest as you lean back slightly. Stay in this position while holding on to the handle and signal to the boat driver when you’re ready. Let the boat do most of the work pulling you upward until you’re on the surface of the water. Once you’re upright, keep your skis approximately shoulder distance apart. Gaining control in this stance will come with practice. Learning to shift your weight toward the direction the boat is about to head is good preparation for keeping power in future turns.

Once traditional water skiing is mastered, you may want to try your hand at buoy courses, accelerated tricks, ramps, or slalom skiing. Another advanced move for skiers is starting on dry land, but this is not recommended until you’ve had plenty of practice. Having at least one person designated as the spotter in the boat is needed for if or when the skier falls into the water.

An average speed of 15 to 30 miles per hour is advised, but this can increase with practice, slalom skiing or in racing. All beginners should remember to follow safety precautions such as wearing a life jacket, keeping an appropriate length of rope between the boat and the skier, and having an experienced driver.

A helpful video on choosing the right water skis can be found below.

Image from Wade Williams on the Wikimedia Commons