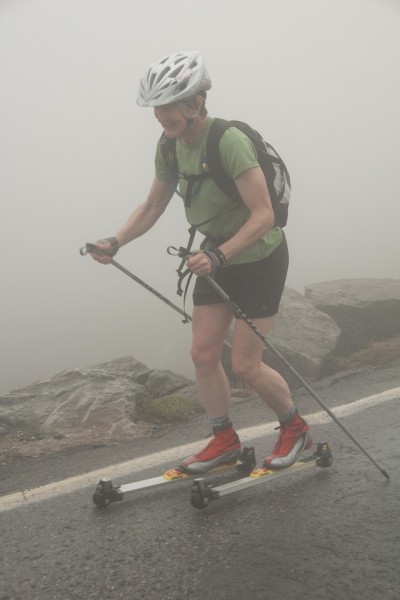 Sue Weymss was the first person to roller ski up the windswept Mount Washington Auto Road, the highest peak in the Northeast at 6,288 feet.

“That was a lot of fun,” says the 1984 cross-country skiing Olympian who competed in Sarajevo, Yugoslavia (now Bosnia and Herzegovina). “I just tried to keep a steady pace and ski with good technique.”

Weymss wheeled through fog up the 7.6-mile long paved and dirt mountain road in 2011, but nowadays is more likely to be out on the rambling country roads in New Hampshire’s White Mountains waiting for the snow to fly before schussing the cross-country ski trails she loves.

Roller skiers are something of an unusual sight on a country road or paved multi-use path, zipping along with poles in hands and wheels underfoot. The motion closely mimics on-snow skiing affording serious skiers dry-land training on rolling hills before winter comes and they can return to the snowy trails on their skinny skis.

Just as Nordic skiers choose between classic and skating technique, so do roller skiers with skis made specifically for either the striding (classic) or skating motion. Think super-sized inline skates.

Classic skis are ratcheted to simulate the kick motion while skating skis  tend to go faster and are non-ratcheted.

Some roller skis have brakes, while many don’t so skiers must stop like they do on snow–from a snow plow position.

There are also rugged roller skis for tough off-road terrain.

Basically, the skis have two narrow wheels one in front of the other and are affixed with bindings that can hold cross-country ski boots. Poles tend to have a sharp carbide point instead of baskets like in winter.

Though highly competitive cross-country skiers may start roller skiing in spring, many school and club programs tend to get racers on roller skis this time of year, often holding roller ski races as well.

“If it doesn’t snow until January, they will still be learning how to ski from October through December,” he explained.

For Weymss, ski school director at a ski touring center at the base of  Mount Washington in Pinkham Notch, New Hampshire called Great Glen Trails, roller skiing comprised about half of her training while competing on the U.S. Ski Team.

“Cross-country skiing works the upper and lower body at the same time,” she says. “So does roller skiing.”

Just as with road bicycling, there are some safety suggestions while roller skiing. Weymss advises wearing a helmet and brightly colored clothing. Neophytes should consider bicycle gloves in case they fall. Knee and elbow pads help. Some skiers use eye-glass mirrors to see behind them.

“Roller skiers really need to know the road ahead of them,” she says. “It is hard to stop and turn quickly. You need to be extra vigilant with traffic on the road.”

“Just like bikers we are always looking for smooth pavement, variable terrain without too steep a downhill and roads without too much of a side pitch,” commented Armstrong.

Even with snow, roller skiers can be out.

“For poor snow conditions during ski season, skiers will get the roller skis out if the roads aren’t too sandy,” he explained. “Skiers in the banana belt may use the rollers all winter and get their on-snow fix on weekend trips north.”

Though roller skiing provides that swift gliding sensation often found on snow, it’s likely best to try only after first having a solid command of the basic skills learned on snow.

“I’d rather see someone start out on snow rather than pavement,” says Weymss. “The falls hurt less.”