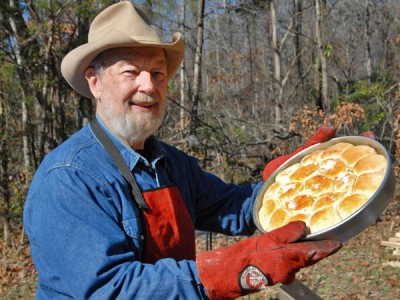 To cook with a Dutch oven, you set it in the coals of a fire and put coals on the lid to give this one pot the ability to bake, stew or boil almost any kind of food – just as the early pioneers did. Dutch ovens were a staple as frontiersmen moved from the East to the West on wagon trains and into cattle country. All the cooking for the cowboys was done over open fires. The Dutch oven and a frying pan were often the only utensils that the chuck wagon chefs carried with them. With the availability of gas and electric ranges, ovens, microwaves and convection ovens these days, the Dutch oven isn’t nearly as much of a necessity as it once was. But there are still many campers and outdoorsmen who enjoy cooking over open fires. Some folks even enjoy cooking in a Dutch oven in the fireplaces at their homes. Let’s take a step back into yesteryear, and learn about an old and fun way to cook that you can enjoy on your next camping trip.

Stir together flour, baking powder, sugar and salt. Cut in butter, until mixture resembles coarse bread crumbs. Make a well in the middle of the mixture, and stir in the milk or the buttermilk. Knead on a floured surface a few times, but work the dough as little as possible to keep the dough from becoming tough. Roll dough to a 1/2 inch thickness. Cut with a 2 inch cutter. Transfer the biscuits to an aluminum pan in a Dutch oven and cook in hot coals. Bake at 450 degrees for 10–12 minutes.

If you like these cathead biscuits, give Fears’ venison stew and his navy beans a try.

Check out this video on the biscuits below.