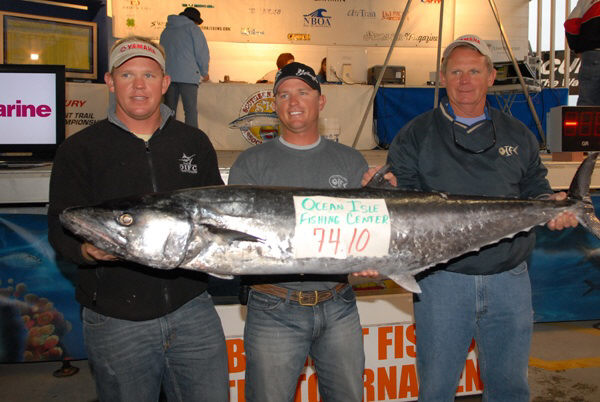 King mackerel, a.k.a. kingfish or just plain kings, are speedy game fish that are fun to catch and tasty to eat when fresh off the boat. With all the emphasis on tournament fishing and the efforts pro anglers put into finding and catching that one big fish to win, a simple fact tends to get lost—anyone can catch kingfish and have a blast doing it!

One of the top tournament captains on the SKA® Yamaha Professional Kingfish Tour is Capt. Brant McMullan, who fishes a Yamaha-powered 32’ Yellowfin® center console. His tournament team consists of his father Rube, his brother Capt. Barrett, and his wife Amy. In 2009, they won the SKA® Nationals in Biloxi, Miss. competing against the top 250 teams from around the country, and they did it in grand style by bringing the heaviest kingfish ever caught in twenty years of SKA tournament competition to the scales, a 74-pound smoker! We asked Brant to give beginners some tips for finding and catching kingfish.

To catch kingfish, Capt. Brant McMullan recommends a seven-foot rod with a light action tip, and a reel with a good drag system, loaded with 20-pound monofilament.

“When fishing competitively, we tend use a variety of live baitfish, but we use the same basic set up I’ll describe,” Brant said. “Most of the time, we slow troll, and the heart of the pattern consists of three outfits, two fished near the surface and one off a downrigger. We frequently fish with more lines out, but these three are responsible for 90 percent of the kings we catch.”

Brant recommends a seven-foot rod with a light action tip and a reel with a good drag system, loaded with 20-pound monofilament.

“With three outfits, a box of frozen cigar minnows for bait and a bottle of menhaden oil as an attractor you can catch kings,” he said. “Thaw the minnows, and then work them with your hands until they are arrow straight from nose to tail. They have rigid bodies so if they have the slightest curve from side to side or up and down they will spin when trolled, and kings will shy away completely. If you cannot get one straight toss it, and never refreeze cigar minnows once you thaw them. They turn to mush after the second thaw.”

Brant uses a simple rig made of light, flexible cable or wire to prevent it from being bitten off by the fish’s sharp teeth, a flashy skirt, two small treble hooks and a miniature barrel swivel to attach it to the line on the rod. One of the points on the front hook is inserted in the bottom of the cigar minnow’s jaw so it exits out the top, centered between the two nostrils on its nose, effectively pinning the mouth shut. The second hook is inserted in the back or side with the leader loose so it doesn’t inhibit the movement of the bait. You can even leave the second hook dangling because the water pressure will hold it alongside the bait when trolling or drifting.

The menhaden oil is used to create a scent trail. To dispense it, get an empty plastic soda bottle and tie a few feet of cord around the bottle neck. Pour the oil into it, put the cap back on tight and poke a few small holes in the bottle with a hook point so it drips out slowly, and put it in the water secured to the spring line cleat.

Brant’s trolling pattern consists of one long bait back about 150 feet, one medium about 75 feet, and one run from the release clip off a downrigger ball set at between one-third to one-half distance to the bottom.

“These three bait positions consistently catch the majority of the kingfish in competition or when I have charter clients on my boats out of Ocean Isle Fishing Center here in Ocean Isle Beach, N.C.,” he told us. “They work everywhere we fish for king from here to Texas. You can add additional lines to the pattern if you’d like.”

Trolling speed is S-L-O-W. You want to be moving just fast enough to maintain steerage. With a single-engine boat, run at idle. With a multi-engine boat, use just one engine and adjust the RPM to maintain the right speed. If there is a breeze, you can even drift fish with the engines off, just reposition the baits off the upwind side of the boat instead of off the transom.

“That’s all it takes to catch kingfish, if you’re fishing the right places,” Brant said.

But how do you find the “right places?” It isn’t as hard as you might think, and often the answers come by simply as asking the question. Start off at a local tackle shop near the water. Buy a chart or some rigs and bait, and ask the person behind the counter where other customers have been catching kingfish.

To attract kingfish, Brant uses a rig made of light, flexible cable or wire, a flashy skirt, two small treble hooks, and a miniature barrel swivel. The skirt rig (right) is only used with dead bait like cigar minnows; the rig without the skirt (left) is used with live bait fish.

You’re now a customer and he wants you to come back so there is a certain obligation to share some information. If you are not familiar with the areas mentioned, have them pointed out on the chart.

“Another good place to pick up information is on the local charter dock after a day’s fishing. See who is offloading kings, but show some courtesy,” said Brant. “Instead of blurting out, ‘Hey, where did you catch those?’ try asking ‘What depth did you find them in today?’ If you learn nothing more than that important piece of information, you are ahead of the game, but you’ll probably find that once you break the ice more precise information on locations is forthcoming.”

Kings can be found from just off the beach to well offshore. The primary factor is finding forage, schools of baitfish that tend to school near the surface like menhaden, cigar minnows and threadfin shad, but structure plays a key role, too. Kings prefer low-lying, natural hard-bottom areas and if the charter boat guy caught them in, say, 50 feet, you go to your chart and look for structure areas in that water depth. Kings like clean water, but water color is less important. If they were being caught very shallow, just off the beach, but an east wind or storm stirs up a lot of sand or sediment in the water, they will move off looking for cleaner water and bait.