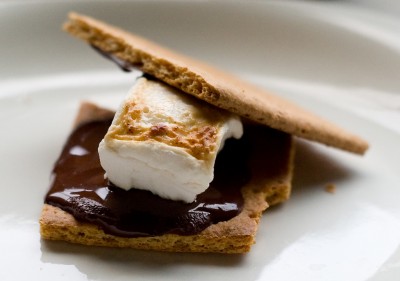 Campfire cookouts are great. S’mores are as American and as enjoyable as apple pie but, if you spend as much time around a campfire as I do, the desire to spice things up a bit can creep into this classic pastime. Try these three alternative campfire foods the next time you’re gathered around the fire with friends and family.

It doesn’t get any easier than this. Take an apple, preferable one that’s just a few days short of ripe, and skewer it. Turn the apple slowly over the fire. Try not to blacken the skin too much. Wait for the apple’s skin to split and some juices to start seeping out. Make sure to give the apple a few minutes to cool down as the juices inside the apple may be close their boiling point.

*Tip: Experiment with different types of apples to find out what you like the best; try green apples for a tart treat or golden delicious for a sweeter dessert flavor.

This is another very simple way to change up your campfire routine. I prefer red peppers to green and yellow but, as long as you can skewer it, this will work fine with any pepper. Before you roast the pepper, you have a choice to make; to remove the seeds or not. Taking out the seeds of any pepper will remove the principal source of capsaicin, which will reduce the heat of the pepper. I recommend leaving them in for two reasons. First, two take them out you’ll need to open the pepper, which can make it more prone to falling off the skewer. Second, why would you want to miss out on all that wonderful flavor? Unlike the apples, you’ll want to blacken the skin of the peppers a bit more (but not char).

*Tip: try this with whole jalapeños or pepperoncinis for a spicier kick!

I’ve got thing against smooshing together some chocolate and marshmallow between two graham crackers, but that doesn’t have to be an end when it could be a beginning.  Why not try some white chocolate and strawberry marshmallows between thin slices of lightly toasted angel food cake? That’s just a start. Try peanut butter cup s’mores by using chocolate marshmallows and spreading a little peanut butter over your graham crackers before you sandwich them together.